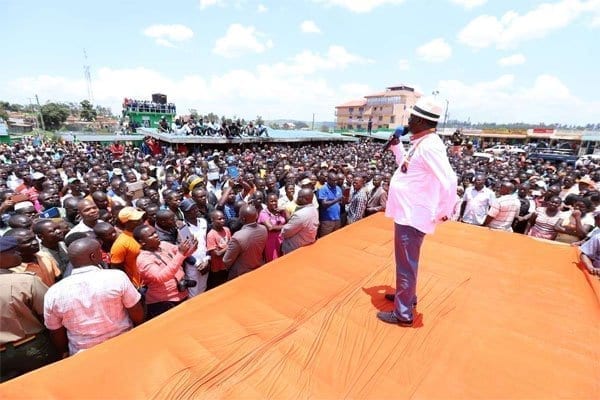 This forced the ODM brigade, led by Raila Odinga, to cancel a planned rally at Kehancha Cereals Grounds.

Trouble began when a local businessman in Kehancha town, identified as Mnati, led rowdy youth to disrupt the rally as people were gathering to await the arrival of Mr Odinga. The youth were chanting anti-Ayacko slogans claiming that the area is a stronghold of Mr Oketch.

Police were forced to shoot in the air to disperse the rowdy youth. Four people were injured in the fracas.

Scores of local leaders who were at the venue blamed local MP Mathias Robi, who has thrown his weight behind Mr Oketch, for inciting the youth.

“We know that Mr Robi is the one behind all these. He has hired goons, led by Mnati, to disrupt ODM rally. We call upon the police to arrest people behind this,” said Mr David Nyangi, a local political activist allied to ODM.

On Thursday,  goons believed to be allied to Mr Oketch, also clashed with Ayacko supporters at Mabera town, moments before Mr Odinga and his team landed.

A photo journalist with Standard Group, Mr Kingson Kingwara, was injured and his camera destroyed in the ensuing chaos.

“I was taking photos of the rowdy youth when some goons approached me and asked me to give them my SD card, which I declined. They then landed on me with blows. My camera was destroyed,” said Mr Kingwara,  who is recuperating at Isibania Sub-County Hospital.

Mr Ayacko and Mr Oketch–the front runners in the race–are battling for the Kuria votes, which are expected to be the swing votes in the race.

The region gravitates towards Jubilee party but given that the party has not fielded any candidate in the race, the region’s votes are open to the aspirants.

NASA would rather ‘lose’ with Raila than win with Mudavadi