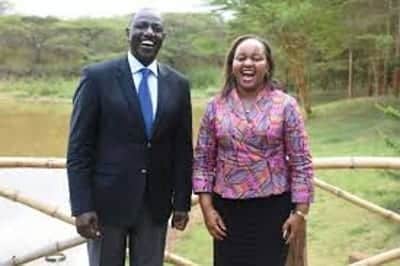 A group in Murang’a have asked Deputy President William Ruto to pick Kirinyaga Governor Anne Waiguru as his running mate in 2022.

The group and clerics and local businessmen endorsed the former CS for Devolution as the only woman from the Mt Kenya region who can take over the baton from President Uhuru Kenyatta as Central Kenya’s political kingpin.

Speaking after a meeting in Kenol town on Saturday, the clerics and traders noted that it is time Central Kenya supported women for top seats.

One of the clerics, pastor Titus Ngugi of Gatanga AIPCA, asked senior politicians from Mt Kenya region to shelve their ambitions and back Anne Waiguru.

“We call upon all politicians in Central Kenya to unite and root for Waiguru. We will lead in preaching the gospel of women leadership,” Ngugi said.

They described Waiguru as a woman of courage and a fighter who did not back down during the tide of NYS graft allegations.

“She wasn’t cowed and didn’t give in to her detractors. This is the woman we would want to lead us,” said Pastor Simon Waweru.

Pastor Ibrahim Chege added that Waiguru is a peacemaker since she has managed to quell fueds in Kirinyaga County.

Mr Gichuki promised to lobby business magnates from the Central region and pool resources to back Waiguru.

Joho’s D- in KCSE ‘not end of the road’, says Raila