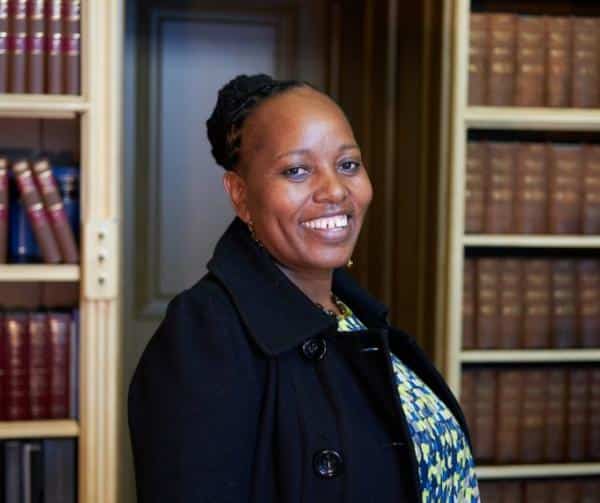 A woman who emerged from the settlements of one of Africa’s largest cities to help in the fight to rewrite her country’s constitution has been named the first winner of the Scottish Bar International Human Rights Award. Activist Salome Nduta, 47, from Nairobi, Kenya, “stood out from the crowd” among 26 entries from around the world and was the unanimous choice of a judging panel to receive the award, the Faculty of Advocates said.

The mother-of-two has suffered assaults, threats and numerous detentions in a life devoted to protecting the rights of others, particularly women. Ms Nduta, a protection officer with the National Coalition of Human Rights Defenders Kenya, said she felt “overwhelmingly happy” to receive the award. “I never expected this, not in my lifetime,” she said. “When it came I was surprised and of course, I shed a tear of joy.”

As a child, Ms Nduta’s father died and the family had to move to “squalid” conditions in Nairobi’s “informal settlements”.
She helped form a federation to fight evictions and went on to qualify as a social worker and paralegal. Ms Nduta became part of a number of human rights organisations devoted to “the second liberation of Kenya” through a new constitution. “I don’t know anything else other than human rights,” she said of her work. One of her methods of campaigning was through drama and dance in theatres – leading to physical beatings and more arrests than she can remember.

“Once, we hid and were trapped under a vehicle,” the activist said. “They could not whip our heads or backs so they removed our shoes and whipped our feet. That was the worst experience for me, it was very painful.” Despite the constitution being signed in 2010, life can remain difficult for many in the country and her work continues. Campaigners can be particularly at risk of assault when working on issues that touch on traditional practices, such as female genital mutilation and early marriage, she said.

Asked about her motivation, she told Press Association Scotland: “There is fear, fear will always drive you. “Not everybody is born a (human rights) defender, there are those who are willing to take up that challenge and speak on behalf of others. “You overcome the fear with the fact that you know what you are doing is right.”

Her current work is focused on supporting other activists. “If a defender is arrested, we are able to bail them out,” she said.

“If they are beaten, we take them to a doctor. If they need psychosocial support, we make sure they get a counsellor. “I enjoy doing this work because I am able to give that which I did not receive.”

The work of a defender can be traumatising and frustration at apparently slow progress over issues can “wear you down”, Ms Nduta admitted. But she added: “The work is challenging and fulfilling. You might go through a lot of harassment, but it is very fulfilling to see even a small change that you have brought about. “You think, after this small change, that whoever comes after you, they are not going to start from where you started but from a different level, and you contributed to that. Those small changes are what keep you going.”

“In many countries, human rights defenders are victims of violence … simply for standing up for people’s human rights – it is vital that we recognise their achievements and stand in solidarity with them“-Shelagh McCall QC, Faculty of Advocates

The award-winner is spending a week in Edinburgh, where she is receiving advocacy training from the faculty and meeting other human rights defenders. The award, launched by the faculty in the summer, aims to honour men and women overseas who champion human rights in the most challenging of circumstances.

Shelagh McCall QC, convener of the faculty’s human rights and rule of law committee, said: “We were delighted with the number and the standard of the entries we received. Salome stood out from the crowd. “In many countries, human rights defenders are killed and are victims of violence, intimidation, harassment and surveillance – simply for standing up for people’s human rights. “It is vital that we recognise their achievements and stand in solidarity with them.”

Scotland’s Equalities Minister Christina McKelvie, MSP, said: “I commend the Faculty of Advocates for establishing this award and Salome Nduta is a very worthy first winner. 2018 is the 20th anniversary of the UN Declaration on Human Rights Defenders, which encourages us all to be human rights defenders. “Salome’s story is one of courage, determination and a commitment to building strong Human Rights Defenders movements in Kenya in the face of threats and violence.

“In Scotland we are determined to embed human rights in everything we do, and I welcome Salome to Scotland as an expression of our solidarity with people throughout the world who put themselves and their families at risk to uphold the fundamental human rights we all share.”

MENTORSHIP OF MSMES WILL GROW THE SECTOR AND THE ECONOMY