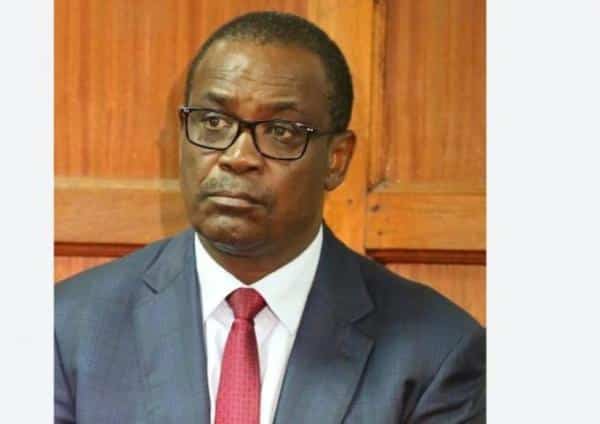 Bwana Governor, I believe you and your family members are well. Sir, before the year ends, kindly allow me to remind you that there’s business I did with you, Prof. Ojienda, Francis Mburu, Dr. Kiplagat, George Wainaina, George Onduto and later Gad Awuonda was added.

It was 23B compensation for the non-existent 58 acres of Mburu’s land in Ruaraka 7879/4 allegedly allocated by the defunct Nairobi City Council. You know the truth that arrangements were made by Lawyer Ombongi of City Hall to issue allotments for only 3 acres divided into 40×80 plots and not 58 acres.

On several occasions after our secret night meetings in your office at City Hall, I arranged meetings between Prof. Ojienda and Francis Mburu to fine-tune the deal at The Grand Regency Summit Club and at Dusit D2 Hotel in Riverside. On their own they had more meetings even at Kempinsky to seal it and from what I came to learn later an agreement was signed for Nairobi City County to pay Mburu Kshs. 4.6B annually until the money is paid in full.

When this deal was reached, I was kept out by you, Prof. Ojienda and Mburu and every time I enquired, I was told by Mburu that the deal would be sealed when you get re-elected. But you had already sealed it and kept me, the original coordinator out.

When I disagreed with Mburu over past payments and decided to reveal the dirty part of what he had done in the past, I left this deal out due to the respect I had for you and Prof. Ojienda not only as my friends but also as my brothers.

I knew this is a deal that would help you, Mburu, Dr. Kiplagat, Prof. Ojienda, George Onduto and I be on our feet again especially after the gruelling campaigns.

I was wrong. You, Prof. Ojienda and Mburu are all greedy. Onduto and I were to get Kshs 2B to share, Dr. Kiplagat and Prof. Ojienda 1.5B each, You, Gad Awuonda and George Wainaina 8B and Francis Mburu 10B.

That’s was the initial verbal agreement. From February, you and Prof. Ojienda have refused to take my calls. Since I will not be benefitting, am left with no choice but to blow it up so that we all lose and go to jail together. Before I blew up the other Mburu deals, I politely as am doing now tried to talk to Mburu and told him I was not the problem in vain. As you can see, my share was the smallest but you people want everything for yourselves.

Like what we did in the past with you, while in Mumias you still owe me 1.5M, in the Express Automations deal, you owe me 1.1M as you sent your bodyguard Kennedy Obuya, the current MCA for Imara Daima to collect the 6M for you from Paresh and Ram instead of me bringing it to you as I did the first batch of 5M.

The deal was 11M, yours 9M and mine 2M but you gave me 900,000/= when I brought the 5M to your house in Muthaiga. Remember you were afraid to take the money directly from the Asians and asked me to keep it and I kept the money in my house for 3 days.

If I was a bad man, I would have taken everything since you owed me money in the past deal at Mumias but I wanted to build a relationship based on mutual trust. I was wrong. You went ahead and helped the Asians supply water purification chemicals at Nairobi Water Company at 46M.

From the above, am I the one who has wronged you, Prof. Ojienda and Mburu or you guys are the ones who take me for a full at every point and turn? I have very good working relationship with the ODPP, DCI and EACC new broom Major Twalib Mubarak Abdallah is my personal friend.

I know I was in the above deal with you guys, but you are forcing me to become a Whistleblower and a State Witness from the 30/12/18 mid day. You once told me you have the means to kill and the money to cover-up the murder of anyone who may threaten your interests in politics and business. On the above sir, am like Al Shaabab, am ready to die or be in Kamiti with you guys.

Reported as per whatsapp viral forward

Video:TV reporter caught on video getting punched in the face

List of Big names who bit the dust in UDA primaries