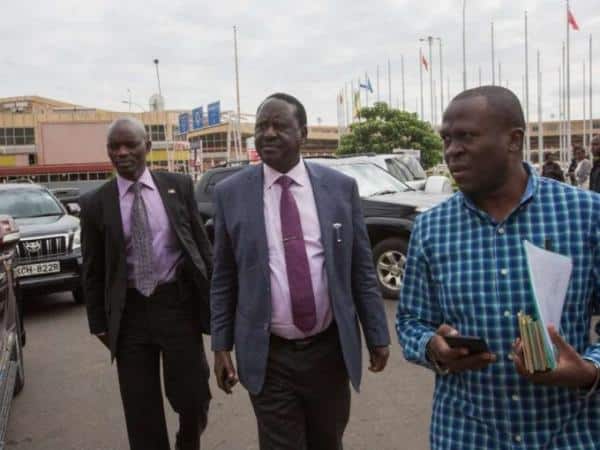 Opposition chief Raila Odinga’s political game plan continues to confound friends and foe after his truce with President Uhuru Kenyatta, which has seen him land a plum continental job.

Publicly, however, the ODM leader rebuffs claims his eyes are trained on the presidency in 2022.

He has, however, refrained from saying he plans to hang his political boots and has been making significant political moves.

For starters, the ODM leader seems to have acquired a new team of advisers and has left out some of the seasoned and long-term trusted lieutenants such as Senator James Orengo.

For many years, Orengo was the chief legal and political adviser to Raila but the ODM leader left him out when he entered into negotiations within President Kenyatta.

In the last few months, Orengo has preferred to focus on his role as Senate Minority leader, as he he prepares for the Siaya gubernatorial race in 2022.

Raila’s elder brother Oburu Odinga and his wife, Ida, remain closer to him.

Perhaps the most shocking addition to the new team is Raphael Tuju, the Jubilee secretary general, who has been on Raila’s opposite side since 2007, when he lost his Rarieda parliamentary seat.

Raila has been talking and meeting Tuju since he announced his truce with Kenyatta. Tuju’s palatial home is adjacent to Raila’s in Karen.

Raila has consulted them on a number of issues and continues to keep them very close as he executes his political plan.

The former Prime Minister — according to various sources — is operating purely on the basis of those who have fully accepted the handshake and who can be trusted.

The team of four is said to be behind most of his political decisions and are often consulted on anything around the truce, which cooled off political temperature following the protracted 2017 General Election.

Junet, who owes his political rise to Raila, has emerged as the number one confidant of the ODM leader and is among the very few individuals who have Raila’s ear.

Of all Raila’s point men, it is only Junet who accompanied Raila to the March 9 meeting with President Uhuru at Harambee House, which led to the historic signing of the Memorandum of Understanding between the two leaders, ending months of political instability.

Other than Junet, the former Prime Minister rarely does anything without consulting Nyong’o. Raila has even allowed the Kisumu governor to lend his vast political expertise to the President on a need-to-need basis. The governor has particularly been involved in the Universal Health Coverage roll out.

Days after the handshake, the Kisumu governor was among the powerful Kenyan delegation accompanying Uhuru to Cuba, where the President went to learn about Universal Health care and also came back with Cuban doctors.

“Homa Bay woman Rep Gladys Wanga is also in the picture because of her unique ability to reach and work with the other side. She drops in with suggestions, updates and information,” the source said.

Paul Mwangi, his long-term legal adviser, has also been retained. Raila consults him often on politics and legal affairs. Mwangi is the joint secretary of the Building bridges Initiative.

The new approach seen as a complete departure from the old Raila, who will use the party’s structures to ventilate on key national issues before he publicly takes a position.

This, the source said, stemmed up from realisation that majority of the ODM leaders leak sensitive strategy information to the media before even being hatched.

It is for the same reason that most ODM leaders are today kept in the dark on Raila’s 2022 political plans after taking up the top AU job.

“From the time Raila went for the handshake, his mode of operation has changed. He shares information with a very tight circle of confidants,” a source well versed with the happenings told the Star.

The ODM leader has since taken up his job as African Union Special Envoy for Infrastructure Development, an engaging assignment that has diminished his role in local politics.

His relationship with Kenyatta has, however, blossomed sending jitters in Deputy President William Ruto’s inner circle

According to Raila’s lieutenants, some of whom have previously controlled his political arsenal, Raila’s moves are strategic.

In an interview with the Star, firebrand NASA CEO Norman Magaya said Raila will be the most potent player in the 2022 politics and will end Ruto’s 10 years career in the Executive.

“He [Raila] will dwarf all the pretenders currently masquerading as potential presidential candidates. He will ultimately deliver the elusive Kenyan dream come 2022,” Magaya said.

Magaya predicts there will be only two extreme political grouping in 2022.

“One led by Raila and the other by Ruto. It will be a contest between reformists and the status quo. Come the Election Day, Raila will be the fifth President of the Republic of Kenya, while Ruto will assume his new position of opposition leader. The 2022 election will yield many political casualties than any other election in our history,” Magaya, an advocate and a university lecturer, said.

Raila’s surprise acceptance to embrace Uhuru at a time when the country was teetering on the brink appears to have changed the country’s political landscape.

His private office at Capital Hill has become a beehive of activity since the March 9 deal.

Delegations from regions, previously seen as “enemy territories”, have been flocking there and climaxed after his appointment as AU envoy.

Interestingly, however, most politicians paying homage to Raila are known adversaries of Ruto.

As a signal that things were slowly changing, Kagwe pulled a surprise when he declared he wants to see Raila’s name on the presidential ballot come 2022.

He said the 73-year-old veteran of Kenyan politics has lived up to his name as an elder statesman and commended him for exhibiting “presidential mannerism”.

In August at least 12 former MPs from Meru, Tharaka Nithi and Embu counties paid a courtesy call on Raila and pledged their allegiance for the Building Bridges Initiative.