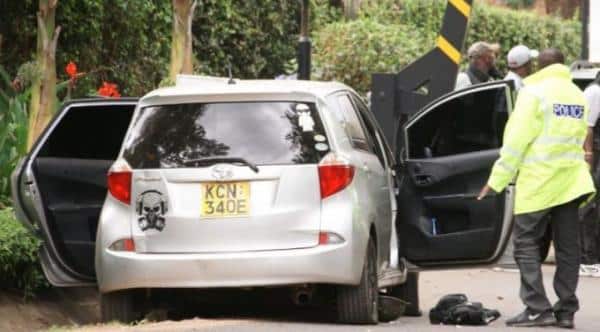 A vehicle bearing graffiti similar to the vehicle used in the 14 Riverside Complex attack caused a stir in Nyeri Town after it was spotted parked outside the Postal Corporation Offices on Wednesday.

Residents took to social media warning that that the vehicle was suspicious noting it had four male occupants.The grey vehicle which was parked in Nyeri Town at 2pm, had three occupants of Somali decent who were believed to be armed.According to the police reports the three were preparing to commit a felony and called for the arrest of the occupants and make a report to Directorate of Criminal Investigations Nyeri office.

However in a twist of event, Nyeri Town MP Ngunjiri Wambugu lauded residents for their alertness and posted on social media that the owner of the vehicle had surrendered to police in Nairobi.“Car owner took himself to Kayole Police Station and confirmed he was in Nyeri heading to Narumoro. This is being dealt with and so far there’s now no cause for alarm,”Wambugu posted.He congratulated all those who raised concern and shared the clip online to have it acted on. “This is essentially what ‘security-begins-with-me’ means,” he stated.

How Raila meeting with Uhuru was sealed-Jesse Jackson key player