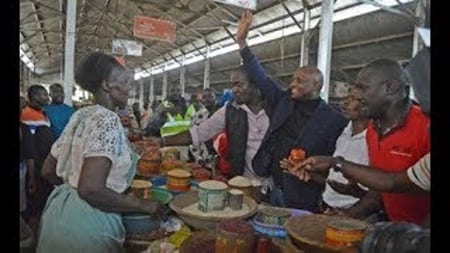 Gatundu South MP Moses Kuria has told off critics of the ‘handshake’ and warned them against early campaigns for 2022 General Election.

“Only a stupid man can oppose the handshake,” he told Kisumu residents who mobbed him as he walked on the busy Oginga Odinga street on Saturday.

“The spirit of handshake is not going anywhere and we need to do this much more. I call upon the critics to shelve early campaigns for 2022 to promote peace and tranquility in the country,” he said.

Mr Kuria, who is expected to attend a thanksgiving ceremony for the Information Communication, Technology (ICT) Principal Secretary Jerome Ochieng in Nyakach, assured the residents they will continue to benefit from the fruits of the handshake.

The controversial Gatundu South MP was responding to remarks made by Senator Kipchumba Murkomen on Thursday when he accused the opposition leader of being behind the Mau evictions, saying they were done in the spirit of the handshake.

“Some people who recently joined the government through the backdoor are working with some government officials to remove people from Mau,” said the Elgeyo Marakwet senator while speaking in Narok.

His sentiments also drew criticism from Nairobi Senator Johnson Sakaja, who urged to stop disrespecting the President by rubbishing his directives.

We want the truth about Fidel: Leaders