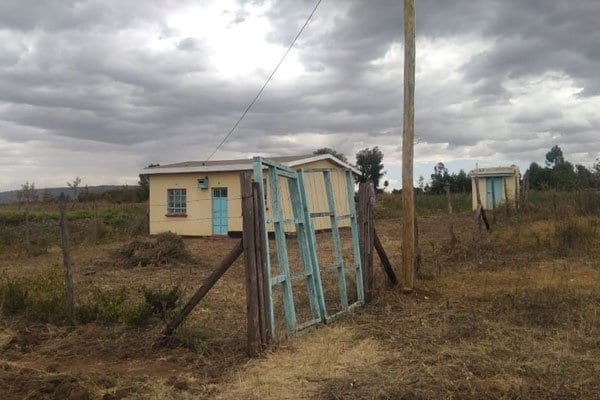 A day after the Nation ran a story about a single mother who declined a house built on orders of President Uhuru Kenyatta to appreciate her son, unknown people on Sunday cleared the overgrown weeds in the compound and repaired the fence.

A local said he saw youths early on Sunday morning clearing the bushes and access road to the house.

The path was inaccessible when the Nation visited the house on Friday.

Before the expose on Saturday, the house — intended to be a gift from President Kenyatta to the family of Master Dennis Ngaruiya for his recital of a humorous poem four years ago — stood in the midst of overgrown weeds, a sign that it had not been occupied for months.

Overgrown weeds on the compound of rejected home meant as a gift from the President were on Sunday cleared. PHOTO | ERIC MATARA | NATION MEDIA GROUP

Some of its window panes were also broken. But on Sunday the house had a fresh coat of white paint and the broken window panes had been replaced. A keen look on the cracked wall, reveals it was constructed shoddily and without much care.

Ms Damaris Wambui Kamau, Master Ngaruiya’s mother rejected the house, saying it was sub-standard and not worthy of a gift from the President.

Ms Kamau said the house was not what Mr Kenyatta had in mind when he ordered a State House official, a Mr Wanjohi, to ensure the family had a decent home.

“This is a big joke. Look at this house. It has cracks on the outside and looks like a semi-permanent house while President Kenyatta in his wisdom meant well for us as a family,” said Ms Kamau.

On Sunday, the compound was still deserted. According to Ms Kamau, some officers at State House were playing tricks on the family.

The house is built on land said to have been purchased by Nakuru Governor Lee Kinyanjui. PHOTO | ERIC MATARA | NATION MEDIA GROUP

A day after the revelation, the Head of Presidential Strategic Communication Unit Kanze Dena insisted that the house was well-furnished.

“From the information I am gathering, the house was built and it is furnished but the lady claims the house was made of waste papers. I don’t understand what she meant by that,” said Ms Dena.

Ms Dena said that the land was procured next to one belonging to a Mr Mike Getone who works at State House.

“Why this family is not living in the house is what I don’t understand. It is only Ms Kamau who can explain to us why she is not occupying the house,” said Ms Dena.

Ms Damaris Wambui Kamau, the mother of Dennis Ngaruiya, outside the house she rejected at Murunyu in Bahati Nakuru North, saying it is substandard and it was not the perfect gift the President had in mind. PHOTO | FILE | NATION MEDIA GROUP

Master Ngaruiya’s journey to fame started when he met Mr Kenyatta in October 2014 during the Kenya Defence Forces day celebrations at 3KR Barracks in Lanet, Nakuru.

His recital of a poem, Our Father, left the President in hearty laughter.

“Though there have been small setbacks in your path, you never cease to build Kenya bwana, ama namna gani?” the poem read in part.

The poem also commended the First Lady Margaret Kenyatta for her continuous efforts in promoting maternal healthcare through her Beyond Zero campaign and the President for his ability to interact freely with the people.

It also extolled the Mr Kenyatta’s simplicity, especially when addressing the citizens with his popular phrase, “ama niaje ndugu zangu?”

Master Ngaruiya would later be invited to meet the President at State House during Mashujaa Day in 2015.

During the meeting, Mr Kenyatta directed a State House official to ensure the boy’s school fees is paid for four years, including his university fees if he qualifies.

The Head of State further ordered that the family, which was living in a mud house built a decent home.

Ms Kamau claimed that she had identified another plot in the area in a relatively good location but it was rejected by State House official.

She said that the house she was offered had been previously occupied and was not, therefore, new.

Ms Kamau lives in a rented mud house in Lanet, some four kilometres away from the house she rejected.

Ms Kamau now wants the Head of State to intervene and help the family secure the gift the family was intended to receive.

The plot on which the house stands is said to have been bought by then Nakuru Governor Kinuthia Mbugua at Sh650,000 before the two-bedroom house was constructed.

THE ONLY WAY TO REALIZE YOUR NEW YEAR’S RESOLUTION

Happy ending: Kenyan to fly back with Indian kidney

Kenyans in US report high levels of diabetes and hypertension