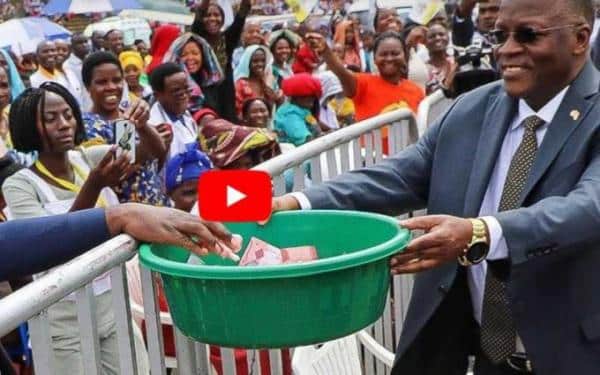 In the video, Magufuli, who was attending the installation of Roman Catholic Archishop Gervas Nyasionga of the Mbeya Metropolitan Diocese on is seen walking around with a basin collecting tithe, his security detail in tow.

Addressing the gathered crowd afterwards, Magufuli revealed that he once harboured dreams of becoming a padre.

“When I was young, I really wanted to be a padre or bishop,” he said to the cheering crowd at the Sokoine Stadium in Mbeya City.

“But I don’t what happened, I failed to become even a catechist. When the choir was singing, it took me back to those days. I was asking myself ‘where did I go wrong’. “I feel jealous for padres; I really wanted to become one of you,” added Magufuli, leaving the crowd in stitches.

“Make sure you carefully count the tithe I collected,” he concluded as the crowd roared with laughter.

Over the last few weeks, there has been a raging debate in Kenya on whether churches should accept harambee contributions from politicians.

Those opposing the idea argue that proceeds of graft are finding their way into church coffers.

On the other hand, proponents of politicians giving money in church harambees have no qualms receiving money from politicians, regardless of its source.

They, instead, focus on their respective churches’ financial needs as they try to meet the demands of their faithful both in terms of social services and physical infrastructure.