By Diaspora Messenger Last updated May 17, 2019 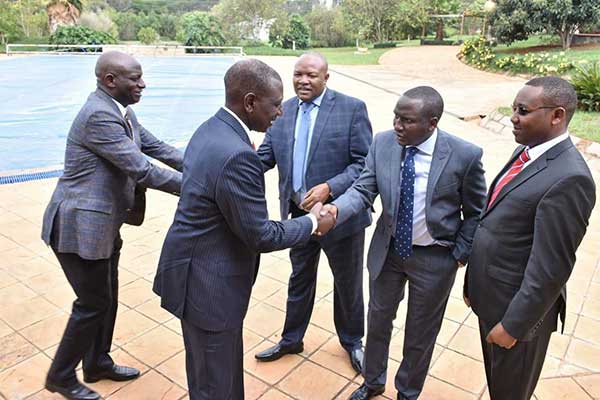 A picture of leaders from Kericho County being welcomed by Deputy President William Ruto during a visit has lit up social media, bringing Senator Aron Cheruiyot into sharp focus.

This is as a result of the posture Mr Cheruiyot took while greeting Kenya’s second-in-command.

The senator is pictured greeting the deputy president with his left hand in his pocket, leaving many wondering whether this was a decent things to do.

As the picture started doing rounds online, the senator, a staunch supporter and defender of the DP, found himself the subject of discussion on various social media platforms especially in the South Rift region.

The second term senator was trolled online for allegedly being disrespectful to the DP.The image was captured when the DP hosted MPs, MCAs and a host of professionals from Kericho County led by Governor Paul Chepkwony at his Karen office on Wednesday.

In the picture, Dr Ruto has both his hands out while Senator Cheruiyot, who is dressed in grey suit, bends forward as he greets the DP with the left hand in his trouser pocket.

Escorting the DP to receiving the leaders was Energy Cabinet Secretary Charles Keter who was also got into another interesting scenario.

While Mr Keter, who is a former senator of Kericho, has both his hands thrust forward for a handshake with Governor Chepkwony , the latter’s attention seems to have been elsewhere – darting towards the DP who had moved on to greet Senator Cheruiyot.

All the while, Soin Sigowet MP Kipsengeret Koros stood watching the unfolding scenario from the end of the line.

As a matter of tradition and show of respect, a person greeting another is expected to maintain eye contact.

Senator Cheruiyot was also at the centre of attraction when he was captured seated with his head bent backwards, seemingly explore the roof of the room he was in while seated with the DP at a table as the meeting progressed.