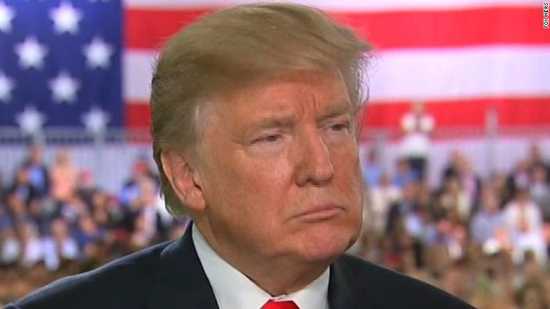 President Trump unveiled a new immigration plan Thursday to move U.S. immigration toward a “merit-based system” that prioritizes high-skilled workers over those with family already in the country.

The plan, which does not address the fate of young undocumented immigrants who were brought to the United States as children, stands little chance of advancing in Congress, where lawmakers of both parties have greeted it with skepticism.

“Today we are presenting a clear contrast,” Trump said in a speech at the White House’s Rose Garden. “Democrats are proposing open borders, lower wages and, frankly, lawless chaos. We are proposing an immigration plan that puts the jobs, wages and safety of American workers first. Our proposal is pro-American, pro-immigrant and pro-worker. It’s just common sense.”

Providing protections from deportations for such young immigrants, known as “dreamers,” has been a leading priority for Democrats since Trump sought to end the Obama-era Deferred Action for Childhood Arrivals (DACA) program.

But White House press secretary Sarah Sanders said earlier Thursday that the plan does not include those protections because the issue is too divisive.

“Every single time we have put forward or anyone else has put forward any type of immigration plan and it’s included DACA, it’s failed. It’s a divisive thing,” Sanders told reporters at the White House, adding that the issue was “left out on purpose.”

Trump said in his Rose Garden remarks that the plan would not change the number of green cards allocated each year but would prioritize high-skilled workers over those with family already in the country. It would allow applicants to rack up eligibility based on factors such as age, ability to speak English, job offers and educational background.

“If adopted, our plan will transform America’s immigration system into the pride of our nation and the envy of the modern world,” he said.

Diaspora Kenyans living illegally in US may obtain legal…

He blasted the country’s current immigration laws as “senseless,” arguing that awarding some green cards by lottery “is contrary to American values” and calling for the U.S. to “create a clear path for top talent.”

Trump’s son-in-law and White House adviser Jared Kushner, who helped develop the plan, previewed it with other Trump aides in private briefings for lawmakers over the past week. But there appears to be no clear path toward advancing the plan through Congress.

White House aides emphasized that Trump is enthusiastically on board with an effort to demonstrate that he endorses legal immigration to help U.S. companies even as he has railed against other groups, including immigrant families seeking asylum and refugees.

The DACA program, created by President Barack Obama through executive action in 2012, has provided renewable two-year work permits to more than 800,000 immigrants who arrived as children.

Trump moved to terminate the program in fall 2017, calling it unconstitutional, but federal courts have enjoined the administration from stripping the protections from those already enrolled, and the case could come before the Supreme Court in the next term. Trump has said he hopes the court permits him to end DACA, which he believes would give him more leverage to negotiate a broader immigration overhaul with Democrats.

House Democrats have put forward a bill that would offer a path to citizenship for DACA recipients, as well as for immigrants who are living in the United States under temporary protected status, which Trump has also sought to end.

Speaking to reporters, Sanders said protections offered through the DACA program are “certainly something to discuss and look at and address.”

“But this plan is focused on a different part of fixing the immigration system, and we’d like for people to not reject it before they even sit down and really learn about it,” she said.

Sanders also sought to put Democrats on the defensive ahead of the formal release of Trump’s plan, claiming there is “nothing in there that Democrats shouldn’t be for.”

“We want to move to this merit-based system,” she said during an interview on Fox News. “Democrats right now, unless they get on board this, the only thing they’ve said they want is open borders. I think that is a terrible thing for our country, and I think it’s a terrible message for them going into 2020. I think it would be wonderful to watch them get on board with something that helps secure our border.”

“Truth be told, the reported White House plan isn’t a serious attempt at immigration reform,” he said during remarks on the Senate floor. “If anything, it’s a political document that is anti-immigration reform. It repackages the same partisan, radical, anti-immigrant policies that the administration has pushed for the two years — all of which have struggled to earn even a simple majority in the Senate let alone 60 votes.”

At a news conference Thursday morning, House Speaker Nancy Pelosi (D-Calif.) said that she favors bipartisan “comprehensive” reform and that her chamber plans to act on several fronts, including protections for dreamers.

Pelosi said she had yet to be briefed on Trump’s plan but took issue with the use of the term “merit.”

“It is really a condescending word,” she said. “Are they saying family is without merit?”

Pelosi also argued that other Trump administration actions on immigration have contributed to what she called a “humanitarian crisis” at the U.S.-Mexico border.

“When you take children out of the arms of their parents, when you separate families, when you do what the administration has done at the border, you are making matters worse,” the speaker said.

Trump’s proposal won’t advance through Congress without buy-in from Democrats and is instead designed more as a messaging document from the White House that details what immigration ideas Trump can promote beyond his hard-line enforcement tactics.

Senior White House officials briefed Republican congressional aides on the broad contours of the administration’s new policy Thursday morning — stressing that the plan would still prioritize immediate families while doling out more generous amounts of green cards based on an immigrant’s skills and educational background.

About 1 million immigrants are granted green cards every year. Unlike with previous White House proposals, the administration took pains to ensure that the net number of green cards — which grant foreigners legal permanent residency in the United States — stayed the same as it is currently so that the overall level of immigration would not be cut.

Under the new system, about 57 percent of green cards would be issued on merit, compared to about 12 percent now, according to White House aides Brooke Rollins and Mercedes Schlapp, who briefed GOP aides on Thursday. About two-thirds of green cards are currently based on family ties, but the new White House proposal would slash that percentage down to about a third, according to an official who attended the briefing.

The plan, White House officials said at the briefing, was primarily to unify Republicans and to show “what we can all be for,” said the official, who requested anonymity to detail a private discussion.

The new system, as White House officials described it, would create a two-step process that begins with a civics test and a background check. Then green card applicants would be evaluated on the new points system.

The White House also asked GOP aides to avoid using the phrase “chain migration” — a term often invoked by the president himself to refer to the process of sponsoring immigrants, particularly parents and siblings, based on familial relations.

There is no finished legislative text, but the White House said it would like all 53 Republican senators to co-sponsor it once it is released in bill form. At one point, Rollins — who works closely with Kushner — said the Department of Homeland Security would get involved in the plan later, which left Hill aides curious to why they hadn’t been previously.

On the issue of dreamers, Schlapp told Republican aides that Trump has repeatedly put forward proposals to resolve the fate of the DACA program and that it was Democrats who have refused to cooperate — although Trump himself demanded restrictions to immigration in exchange that were a nonstarter with most Democrats and some Republicans.

A number of White House aides are skeptical of the plan having any chance of passing and say the president having a Rose Garden speech for immigration is a waste of his time, when he should be traveling to promote trade or working on international affairs.

Kushner’s team has kept the plan “close hold,” one senior White House official said, “which is good, so no one else gets blamed for this.”

Kushner’s team has tried, with mixed results, to build support for the plan.

During a Roosevelt Room briefing with surrogates Wednesday afternoon, Kushner described the new proposal as a “starting point,” according to an attendee, and the president’s son-in-law said the White House was not under any illusions that this would easily get through.

Felicia Sonmez contributed to this report