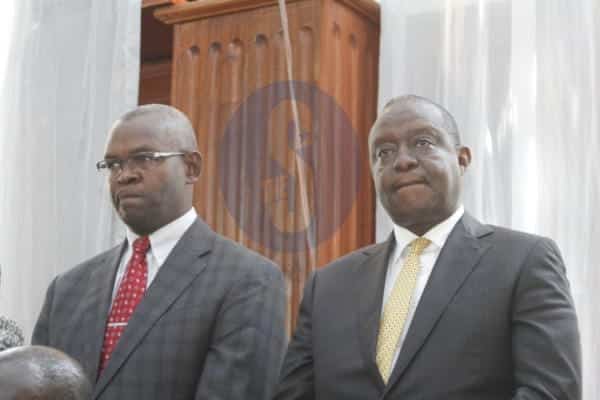 Treasury CS, Henry Rotich, and his PS, Kamau Thugge, were on Tuesday released on a Ksh50 million bond with an alternative cash bail of Ksh15 million.

While delivering his ruling, Justice Douglas Ogoti also gave the suspects conditions to meet or else they will be denied bond until the case gets terminated.

Ogoti ordered that for the suspects, including Rotich and Thugge, should not access their offices unless accompanied by an investigating officer.

The suspects were also ordered to deposit their passports at the court.

“Accused one, Henry Kiplagat Rotich, and accused two, Kamau Thugge, each to be released on a bond of Ksh50 million with one surety of similar amount or a cash bail of Ksh15 million.

“All accused to deposit their passports and all their travel documents in court as argued… They are accorded 48 hours to surrender the same,” ruled the judge.

“The places of work of accorded persons are considered scenes of crime and they should keep away. If there is any need to visit their places of work, that should be done in the company of their IO (Investigating Officer).

“All accused should not approach any witness in any manner and for whatever reason. Such actions will lead to cancellation of bond,” he continued.

Wafula Chebukati: I will not resign ahead of repeat presidential poll