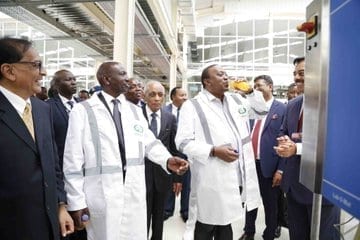 “I am a very proud deputy of Uhuru Kenyatta,” he said on Thursday.

Ruto spoke during the interment of former Gatanga MP Peter Kenneth’s mother. She died after a long illness.

His comment came a day after one of his allies and Kapseret MP Oscar Sudi took a swipe at Uhuru, saying he is incompetent and that the DP was pretending to be friends with the Head of State.

Sudi said Uhuru’s relationship with Ruto has ended and they are engaging in a fake political union. The MP said he could make a better President than Uhuru, adding that the Head of State targeted hardworking state officials in the war on graft.

Ruto, however, on Thursday put a vote of confidence in Uhuru’s leadership capabilities.

This loosely translates to, “Leaders who spoke before me have proof that you are working, from roads, to electricity and water. This shows your leadership is transforming Kenya.”

Ruto continued to say, “We are all confident that the transformation you promised is well underway.”

He urged Murang’a county and the country at large to stand by Uhuru to ensure Kenya develops.

Ruto also addressed Uhuru directly, saying the drive he started in 2013 to bring Kenyans together is on course and should continue.