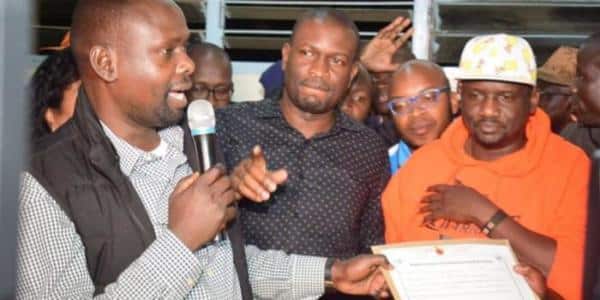 Taking to his social media, the communications specialist stated that he had not engaged in any underhand scheming with Imran and dismissed alleged WhatsApp communication on the same.

“As I laugh off the allegations, I want to state categorically here that in my entire life as the Director of Communications for the ODM Party, I have never ever engaged with politicians on matters nomination.

“For the record, I only rang Mr. Imran yesterday on instructions from my boss the Secretary-General Mr. Edwin Sifuna to inform him of how to conduct himself in the event he is invited for a media interview. I did that in my capacity as the DC of my beloved party ODM. That’s the only time I have ever spoken to Imran,” Etale divulged.

He added that the weekend was a particularly difficult period for him having laid his brother-in-law to rest.

“If Imran gave me Ksh2 million, I would not have cracked my head, pestering and bothering friends to stand with me to raise funds to bury my elder brother,” he stated.

Etale further declared that he was ready to resign if the alleged WhatsApp messages with Imran were found to be true.

“I have never chatted with Imran or any aspirant either by text or WhatsApp. In any case, I was least involved in the Kibra nominations as I have always done in other similar exercises.

“Ignore anything being spread online by my detractors. In due course, I will get to the root of the whole propaganda,” he asserted.