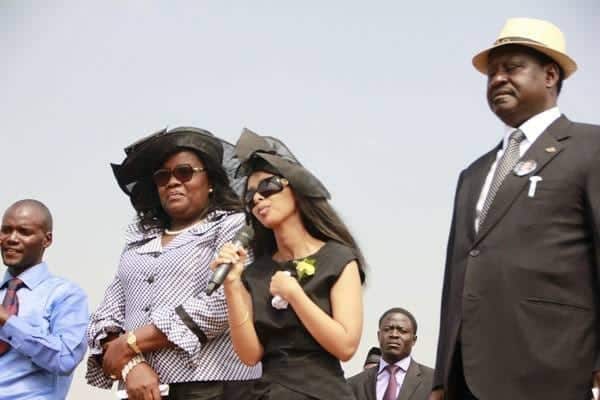 In the story, the media outlet reported that Ida, Odinga’s wife, is embroiled in a bitter property dispute with her daughter-in-law, Lwam Getachew Bekele, the widow of Odinga’s son, Fidel, who died in 2015.

Ida is reportedly opposed to Beke managing a multi-million estate that was left behind by Fidel.

The Standard had indicated on Sunday night that the story with the headline “The fight in Raila’s home” would appear on the Monday paper.

However, a different story appeared on the front page and no mention was made on Odinga’s succession row.

The story had even appeared briefly on the paper’s online platform, epaper, before it was pulled down mysteriously.

The estate in question comprises of Karen home, three parcels of land, two Range Rovers, a Nissan Sunny and a Mercedes Benz, and seven bank accounts.

Bekele had reportedly applied for a grant of representation to allow her to run the estate, after the death of her husband on January 4, 2015, after he died without a will.

Ida teamed up with her daughter Winnie to challenge Beke’s application in court.

The duo argued that Beke’s move unjustifiably left out other parties interested in Fidel’s estate.

Ida claims that Fidel had a secretive lover, who he sired twins with.

She defended her move saying the children deserve to be listed as dependants on late Fidel’s property.

Ida noted that Bekele had cut communication with the Odinga’s after she fled her matrimonial home in Tipuana Park in Karen, Nairobi immediately after the deceased was buried.

Bekele, who only had one child with the deceased, however, rubbished the claims terming them as false.

She further argues that the said twins were born six months after Fidel’s death and their birth certificates don’t bear the deceased’s name.

The paper reported that the case will be mentioned on Wednesday, October 16.