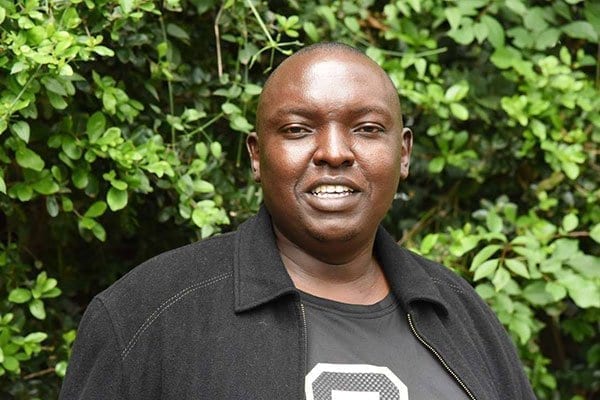 He says that every day, he thinks of how he can kill himself in order to escape from his mounting tribulations, a situation he links to his boss.

In letters seen by the Nation and which he sent to his bosses in Nairobi recently, the officer clearly indicated that he is depressed and is giving up on life.

In a tell-all exclusive interview with the Nation that shows what officers investigating big cases involving millions of money go through, Mr Muthui said he had decided to speak out following advice by some of his colleagues who were worried about him after he revealed his suicidal thoughts to them.

Mr Muthui, a police corporal, has been the lead regional investigator in the suspected loss of millions of shillings from the Sh15 billion compensation kitty established by the Jubilee administration during its first term for the internally displaced persons including the 2007/2008 group.

The officer, who joined the police service in 2002 after high school, said he had cracked a cartel in early 2018 that was swindling money from the vulnerable displaced persons by using their IDs to siphon millions of shillings in collusion with top managers of a local bank that was the custodian of the money.

Early last year, upon thorough investigations, he established that a Ms Margaret Wangoto Gathoni was allegedly leading an extortion ring that was going around the country taking money from IDPs with a promise to put them in a genuine list of beneficiaries.

He said she was using the identification documents of the IDPs to generate a list that would then be presented to the bank and the money would be released to her to take to them, which never happened.

But having established the case, Mr Muthui decided to summon her last year.

However, unaware that he was about to open the gates to hell on earth, Mr Muthui asked her to appear in his office in Kapsabet in March 2018 where he took her statement and fingerprints in preparation for arresting and presenting her in court.
TROUBLES
“That was the beginning of my troubles,” he said.

He said in July 2018, as he was putting together the evidence before finally presenting her in court, Ms Gathoni approached him, asking him to drop the case with a promise of a bribe, which he declined.

“She promised me Sh300,000 to drop the case. Later she promised Sh3 million so that the file could disappear fully. But having taken the oath at Kiganjo to obey the Constitution, I declined once again and told her I would not be intimidated by anyone,” the officer said, adding that despite Ms Gathoni claiming she was related to President Uhuru Kenyatta’s family, he soldiered on with the investigations.

Not long after, he was summoned by his boss, the Nandi County Criminal Investigations Officer Sammy Mukeku, who asked him to hand over the file.

Mr Muthui declined to do so.

This marked the beginning of his troubles.

“When I decided to take her to court, my boss summoned me and asked me to hand over the file. I declined and requested him to make it formal. I asked him to do a memo to me requesting the same and also that we do an inventory of the file because it is the procedure required when handling over high-profile cases like the one I was on,” he said.

As things got thicker, he suddenly received a transfer letter which he interpreted as aiming to cripple the high-profile case.

“When I refused, my boss threatened me, saying he would take stern action against me. This February I was maliciously transferred to Lamu which was occasioned by my boss. I have requested for the transfer to be rescinded for at least three years for me to complete my master’s degree because there is no Jkuat campus in Lamu,” said Mr Muthui.

He is pursuing a master’s degree in Information Technology at the Jomo Kenyatta University of Science and Technology (Jkuat), Eldoret campus.

Upon his refusal to go to Lamu, he was reported to the police headquarters and his salary was immediately stopped.

“I have not received any salary since April. I have a feeling I’m being transferred to Lamu so that I can be eliminated and the same blamed on Al Shabaab operatives there (sic),” he told the Nation.

Other than failure to get his pay, he said he has since been locked out of office for close to a year. His firearm has also been taken away.

After being declared an outcast in Kapsabet, he decided to write to the Internal Affairs Unit, the police department that handle officers’ affairs, requesting for its intervention.

In a letter dated April 25, 2019, he set out his case against his boss, requesting the unit to intervene and ensure his job is safeguarded and justice served.

He clearly indicated that he was thinking of taking his own life to escape from the troubles he was facing in the course of his duty.

“I am hypertensive and Mr Mukeku’s actions have made me sink to depression, hopelessness and on the verge of giving up on life, a matter which has also negatively affected my family,” he said in the letter.

After he wrote the letter, officers from the unit visited the station and recorded statements from him and Mr Mukeku.

Nothing has happened since then.

Unsatisfied, Mr Muthui sought the assistance of the National Police Service Commission last August but he is yet to get any response as well.

“I have incurred huge debts and at the same time I have not been able to adequately provide for my family. All these has made me to feel suicidal most of the times. It is only by the grace of God that I have been able to write this letter. My family has been organising for my counselling but I am on the verge of giving up on life instead of going through all this trauma and pain caused to me as a result of my performance of my duties as per the law,” he wrote to the commission on August 27.

“The said Gathoni, together with members of her cartel, have been traversing Nandi, Siaya, Nyandarua, Kiambu, Uasin Gishu, Trans Nzoia and Laikipia collecting millions of shillings from vulnerable, needy and ignorant members of the public for the purpose of registering them with a promise that the national government will compensate them by giving them monies and allocate parcels of land,” he indicated in the letter to the police headquarters.

The officer, who joined the DCI from the General Service Unit, has pleaded with his bosses for understanding for breaking protocol, saying he did not have other options but to speak out.

“This is a high-profile case. I ask my President, CS Matiang’i, IG Hillary Mutyambai, to kindly forgive me because I am not supposed to speak to the media but the only other option I had today was to commit suicide. I have been suicidal most of the time. I have been on anti-depressants most of the time,” said the father of three.

In his response to Mr Muthui’s accusations, Mr Mukeku, the Nandi criminal investigations boss, denied that he was trying to interfere with the IDPs’ case, saying that as the boss, he was only interested in knowing its progress.

He said the case was on its infancy and that nothing much had come from it.

He also added that he was aware that Ms Gathoni had been summoned to record a statement by Mr Muthui.

“I know he summoned a lady called, Gathoni. The lady came to my office with an advocate and other four suspects. I called Muthui to bring the file but he declined. I ordered him to record the statements from Gathoni and the others but he became elusive. The file was becoming problematic. A case of such a nature must be properly done before it is forwarded to the State office for directions. I have no authority to close an investigation until it goes full circle,” the DCI boss said.

On the transfer, Mr Mukeku said he does not have the powers to do so, saying it is the decision of the Director of Criminal Investigations George Kinoti.

“It is the prerogative of the director of DCI to transfer officers. I played no role in the transfer of this officer. He was transferred with other 348 officers across the country. There was no specific case which I know of which caused this transfer,” Mr Mukeku said.

He said the officer is only frustrating himself by refusing to obey matching orders and going to Lamu immediately.

“This officer is frustrating himself. We are working in the disciplined service. He signed a contract with the government that he can work anywhere. The director saw that he is fit to work in Lamu where his services are required. He is frustrating himself by failing to obey police orders. If he cannot obey orders who is he accountable to? There is nothing special here,” Mr Mukeku added.

And speaking to the Nation, Ms Gathoni said she was aware of the investigations and that Mr Muthui had questioned her, promising to take her to court.

She said she is ready to face him in court and defend herself.

She added that she has never offered anyone a bribe and will not do so in the future.

“I do not have such kind of money to give to anyone. He should stop spoiling my name with these claims. He is just interested in soiling my name through the media. I am ready to take him to court for doing that, tell him so,” she said when the Nation reached out to her.

She said her tenure at the IDPs commission ended in 2017 and she is now focusing on her timber business.

“I was not so poor when I was appointed. I had already bought a car. Some people have been claiming I used IDPs’ money to buy a car. Let them know I was not that poor. I am a business lady who has earned from her businesses,” she said.

Ms Gathoni accused the officer of becoming a “coordinator of IDPs” instead of an independent investigator.

“Mr Muthui has taken me through so much troubles. I have only been praying to God to protect me,” she added.

Is the problem law or Raila? Ruto asks on national resistance