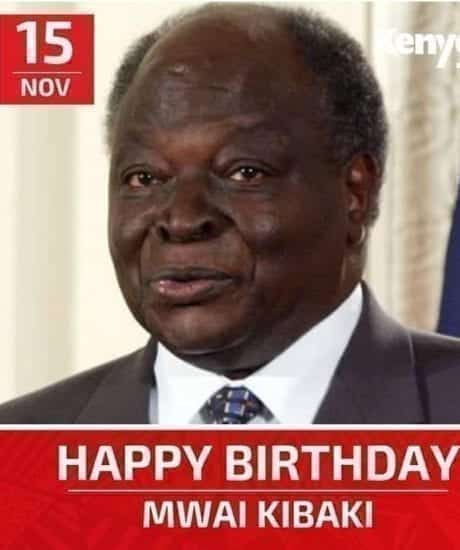 The celebration of another year of life comes amid concerns over the health of Kenya’s third head of state.

Mr Kibaki has been in and out of hospital for various exams— the most recent visit being October 28, where he underwent a “routine check-up”, according to family sources.

He has also been battling a recurrent knee problem after sustaining an injury in a road crash in Machakos in 2002.

On his birthday, source close to the family on Friday told the Nation that the former president is doing “very well”.

However, the source, who sought anonymity because he is not the family spokesman, said there will be no fanfare during the celebrations.

Only close family members will attend the party, according to the source.

“The birthday will be marked, but quietly.”

On what the former president has been up to, the source said Mr Kibaki “has been resting and catching up with his old friends quietly” and “following world affairs closely”.

The former Narc Party leader, he said, has been “reading”.

On Friday, Kenyans on social media sent their messages of goodwill to Mr Kibaki as others drew comparisons between his administration and those before his and the current regime.

Other such as Nathan Sialah compared Kibaki’s administration with past regimes, noting that his government delivered better for Kenyans.

“We miss your services, sir. You were a true democrat,” said Sailah.

While the national debate on the performance of the country’s economy and the escalating cost of living rages, discussions have also been rife on social media.

A section of Kenyans believe that the economy fared better under president Kibaki, arguing that there was more money in their pockets then than now.

They also believe that the cost of living was manageable under the ruling Narc party and the Grand Coalition.

Mr Kibaki was born to peasant parents Kibaki Githinji and Teresia Wanjiku in 1931 in Thunguri Division of then Nyeri District.

A Catholic, he was baptised Stanley Emilio by Italian missionaries. He has, however, been known as Mwai Kibaki throughout his public life.

Mr Kibaki remains one of the longest serving politicians in the history of the country, having put his hat in the ring in 1960 as an executive officer of Independence party Kanu.

The Makerere-trained economist was also part of the team that drafted the country’s Independence Constitution.

He first served as the MP for Donholm Constituency, which was subsequently renamed Bahati and later Makadara.

Mr Kibaki became the country’s third president in 2003, riding in the wave of the National Rainbow Coalition (Narc) that featured top politicians and rebels from Kanu.

It is during his 10-year-rule that Kenya witnessed massive economic recovery and development, with mega infrastructural projects and multiple reforms initiated.

Kenya also got the 2010 Constitution under his rule, on the second attempt after the first stab failed in 2005 when Kenyans rejected the Wako Draft.

The highlight of Mr Kibaki’s leadership was when the country reached its highest ever economic growth of seven percent in the build-up to the 2007 elections.

His presidency though would be blotted when the country plunged into ethnic turmoil following the disputed presidential results of the 2007 general election.

More than 1000 people were killed and nearly 600,000 others displaced from their homes in the post-poll chaos that rocked the country.

An ardent golfer in his heyday, Mr Kibaki has maintained a low profile since he left office six years ago, appearing in public on rare occasions.

WHY OBAMA HAS INVITED UHURU TO USA

Uhuru recalls all provincial commissioners,does the means no Chiefs,DO etc?

Positive Thoughts: There’s no sense in blaming the mountain for being too high