Collins Kweyu, a cameraman for The Standard was the journalist caught up in the scuffle.He appeared to be in the governor’s way as he was dashing past the EACC’s gate probably to get a clear shot of the Nairobi Governor. 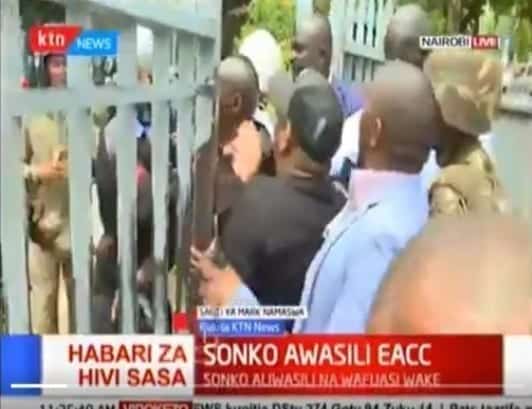 Collins was stopped by police officers at the gate just as Sonko who was right behind was trying to gain access to EACC, Sonko is seen raising his hand before landing a very quick slap on the journalist’s head.

A man in a light blue coat who is believed to be the governor’s security detail was vividly captured landing a slap that turned into a grab on Collins’ jacket then quivered him back.  The journalist tried to confront his assailants as they dropped out of sight into the EACC compound.Mike Sonko looked back once after the gate scuffle as he swaggered towards the anti-graft agency building.

Collins did not sustain any major injuries but said he had some back pains.“Yes, I was hurt on my back and my shoulders because the push and pull was very ugly,” said Collins.

The incident evoked mixed reactions online as some argued that the journalist should have accorded the governor respect due to his status and let him pass.Others, however, averred that the said excuse does not justify the governor’s actions.

Other journalists were also entangled in the chaos after police officers lobbed teargas canisters to disperse Sonko’s supporters and the members of the press had a share of the smoke.“Even journalists were teargassed and that was very bad because we had cameras and they should have known we are unarmed and we cannot fight them,” said Collins.

Sonko roasted for “I wish Sonko Rescue Team could…

Collins said that members of the press had organized themselves waiting for the governor to arrive but the police’s move to deny them entry is what triggered the chaos.

“We had organised ourselves to take the photos as usual and when the governor arrived, he was denied entry. Sonko alighted from the car and the police started lobbying teargas,” added Collins.

Journalists could be seen in footage scampering for safety trying to doge the teargas smoke.“They could have a let the governor in with his car but they denied him entry and worse before that there were people demonstrating.”Governor Sonko has been summoned by the anti-graft agency to set the record straight over his alleged past criminal life.