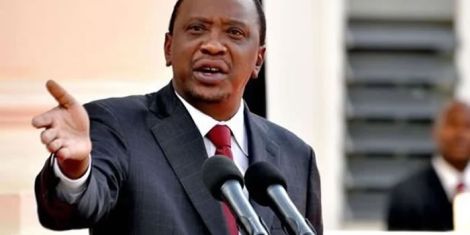 VIDEO: Uhuru’s Impromptu Visit in Mt Kenya makes the crowd wild. President Uhuru Kenyatta made a low-key visit in his backyard, Gatundu South, raising speculation about what could have informed his visit amid reports of a split among leaders in the Mt Kenya region.

On Monday, November 4, Nyeri Town MP, Ngunjiri Wambugu, took to social media to share a video of the head of state apparently interacting with the residents.

“Uhuru in Gatundu. Ground ni different (a truncation of the now-popular phrase ‘on the ground, the situation is different‘,” Ngunjiri posted on Facebook.

In the video, Kenyatta is seen wearing a blue shirt, shaking the hands and hi-fiving a crowd who mobbed him. His security entourage was also casually dressed and did little to ward off the crowd.

Jubilee’s communications director, Albert Mwemusi, played coy with the President’s visit, only stating that he was on an official visit to the area. He, however, did not divulge more.

State House spokesperson, Kanze Dena, when contacted by Kenyans.co.ke declined to comment on the matter with a response to the effect that the president did not actually visit the area.

Mt Kenya region has been in the spotlight with reports indicating that the region was divided over President Uhuru Kenyatta’s legacy with two factions of Uhuru’s party; Kieleweke and Tangatanga both originating from the region.

Nyeri Town MP, Ngunjiri Wambugu and Kirinyaga Governor Anne Waiguru have been spearheading campaigns for Kenyatta’s BBI and also expressed their support for the handshake between the president and ODM leader Raila Odinga.

Other area leaders such as Jubilee Nominated Senator, Isaac Mwaura, and Agriculture CS Mwangi Kiunjuri have poked holes into the BBI, warning Kenyatta that they would support it on several conditions.

Kiunjuri argued that the findings of the project had to be fair to everyone countrywide and that the region’s representation in the National Assembly needed to be improved.

Deputy President William Ruto has also been making several trips to the region in a bid to drum up support for his 2022 presidential ambition.

In Gatundu South, area MP Moses Kuria has severally called on the President to tour his region and reassure residents that he had not ‘deserted’ them. Kuria alleged that several projects launched in the region were stalling and urged politicians from the area to act swiftly.

In April 2019, a report by the Daily Nation indicated that Kenyatta and Odinga postponed their planned visit to Mt Kenya region amid a simmering rebellion by a section of Central Kenya politicians over the duo’s political pact.

WORRYING TREND WHERE KENYANS ARE BEING LED TO IDOL WORSHIP