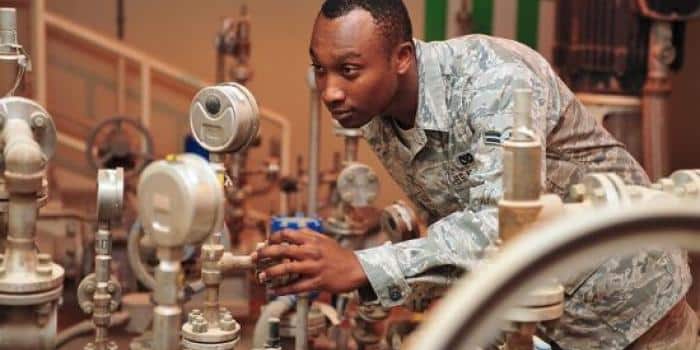 Kevin Yator, Kenyan born and raised, is an Airman 1st class in the US Air Force deployed to the 380th Expeditionary Civil Engineer Squadron and stationed at Barksdale Air Force Base in Los Angeles, California.

According to the US Department of Defense, Yator lost his parents while in secondary school and was forced to move around with his brothers in search of a place to live. At the time, his father was an inconsistent figure in their lives.

While living with a friend post the 2007-2008 tribal clashes, Yator tried out his luck at acting in local theatres, little did he know an opportunity to be on TV would later come his way.

“I moved in with a friend and started theater acting. I began acting on a popular drama series called ‘The Team’ which was created in response to all the violence during the elections,” Yator narrated in an interview with the US Department of Defense.

He was drafted to feature for TV series The Team: Kenya, which was aimed at using soccer as the common ground to preach unity and root out social conflicts and aired on Citizen TV.

The programme was tailored to relate to the context of the country with which it aired, and having premiered in several other countries in Asia and the Middle East, Kenya’s post-election violence presented an opportunity to preach peace through the TV show.

The series followed a soccer team, Imani FC, that was comprised of youth from different tribes who were expected to overcome their differences and become better as a team.

They toured several parts of the country engaging with every community and persons from all walks of life in a bid to understand the situation in the country and in the process preach unity.

According to the Public Broadcasting Service (PBS), the series garnered a viewership of 2 million in 2010.

Yator got the idea of seeking the ‘American Dream’ from a relative living in the US at the time, who adviced him to try out his luck with the green card lottery programme.

“I was in search of better opportunities, and my cousin, who was living in the U.S., encouraged me to pursue a track scholarship,” Yator stated.

“She also said I should apply for the visa lottery. So, in 2009 I went into a cyber cafe and applied,” he added.

He continued to feature in the TV series, and in March 2010, he got a congratulatory letter from the US State Department that he had won a green card.

After moving to the US, he lived in Washington D.C with a cousin and worked two retail jobs while attending college at the same time.

It was not until the dusk of 2011, that another of his cousins, a retired US Army veteran,  asked him to enlist. And in March 2012, he enlisted for the Air Force.

“I could go to school and earn money. He also said the Air Force was more career-oriented and there would be more room for growth,” Yator reminisced on his cousin’s advice.

He recounted being named an honour graduate at the end of his five-month technical school as one of his proudest moments.

While in service, he managed to pursue a bachelor’s degree in Corrosion Control and another in Petroleum Engineering.