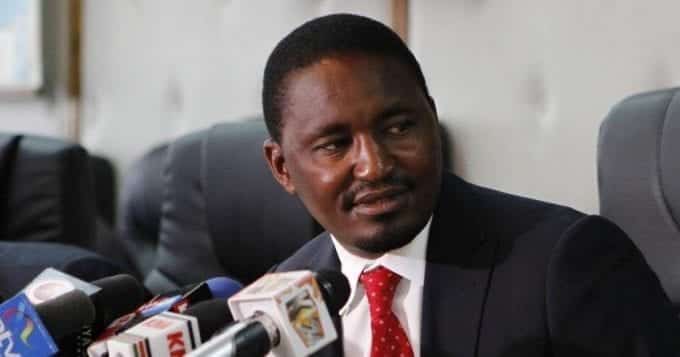 Sacked Agriculture Cabinet Secretary Mwangi Kiunjuri (Pictured) has figuratively responded to President Uhuru Kenyatta’s move to relieve him of his duty saying he is not going anywhere.Kiunjuri was sacked on Tuesday morning after President Uhuru announced a raft of changes in his Cabinet.Former Trade CS Peter Munya took over the fat Agriculture docket with immediate effect.

“I have a lot to offer. I will continue to serve faithfully in other capacities. Make no mistake, I am not going anywhere,” said Kiunjuru during a press conference on Tuesday evening.He played down a question from reporters who asked him to clarify his remarks.Kiunjuri continued to speak metaphorically during the press briefing saying he is not surprised by the President’s move to show him the door.

“The President’s decision has taken me by no surprise. I thank God. I feel relieved,” he said.Kiunjuri said that he has suffered humiliation in the past one year as the Agriculture CS and that he is not surprised.

“I have gone through a difficult year that occasionally threatened my energy. Only God knows what it (the humiliation) has made me feel,” he said.Kiunjuri was publicly lectured by the President Uhuru Kenyatta in 2018 during the height of the maize scandal.In September 2018, President Uhuru publicly warned Kiunjuri over irregular payments made to maize cartels through the National Cereals and Produce Board (NCPB).

Uhuru swore before God to punish ministry officials if they failed to pay maize farmers, who had supplied grains to the National Cereals and Produce Board (NCPB).”I promise you and I swear before God, try that again and you will see what will happen to you. Sisi hatutaki mchezo tena (We won’t entertain this again),” he stated as he pointed at the CS.

Next moveKiunjuri did not disclose his next move after the Uhuru’s shocker. He said he will keep a low profile but warned against provocations saying “for every action, there will be a reaction.”He added: “When God closes one door, he opens another one. I believe there is a door down the route.”Despite his tribulations, Kiunjuri told reporters that he is proud of his achievements in the Agriculture docket and he is leaving with his head held high.“In my four years, all agricultural production at all levels are going up (economically).”

His urged his supporters to remain calm and weep on his behalf.