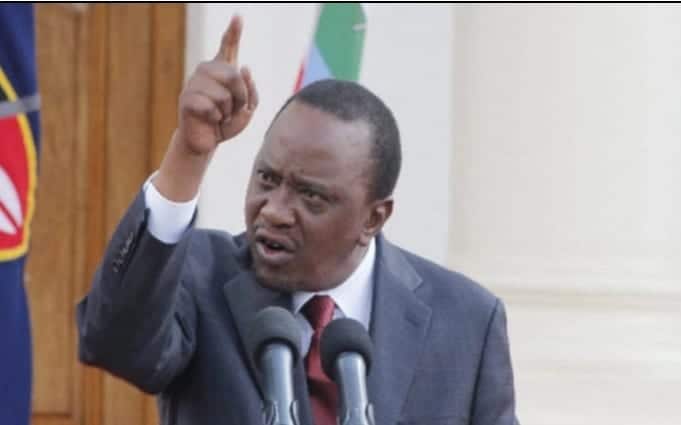 One thing we know about Uhuru Kenyatta is that he is an angry president. We have seen him openly express his anger and distrust of his political foes on TV and political rallies.

Kenyatta is known for calling others “washenzi” (fools) when he is angry about them. He repeats this statement all the time, “Ukishikwa beba msalaba wako.” Distancing himself from corruption cases, and yet it is his job to stop the corruption before it even happens.

Uhuru’s anger emanates from the mistakes he made in his early days as president. Uhuru made some mistakes when he became the president in 2013.

He loosened his grip to power and control and let everyone in. At that time, the hype was high, with everyone going straight to the president. Unfortunately, bad people took advantage of him and began to embezzle and mismanage public funds because “mkubwa” (the president) was not asking them.

Now they have stolen, squandered money, and slept on the job; the damage is already done. That’s why Uhuru is very angry about them because they betrayed his trust.

Another thing about Uhuru is his paranoia, extreme, and irrational distrust of others. He usually suspects that his CSs and political allies are lying to him, that they are going behind his back, and stealing money.

That paranoia is very bad in governance because it makes a leader do things based on emotions of anger and fear instead of intelligence and critical-decision making. Even if you are a good CS or MP working in the Jubilee government, you are not immune to Uhuru’s distrust. If he suspects that you have done something wrong, then you’re done.

That paranoia is there because Uhuru relies much on what the media is saying and what his critics are saying. Somehow, these external forces inform his decision-making process. That’s very bad for a country.

This cocktail combination of anger and paranoia is very bad for the president because it makes him overreact all the time. One type of reaction is the way he keeps appointing the elderly to senior government positions.

In this case, he suspected or realized that young people were failing him. In response, he began rooting them out and bringing in officials who are above the retirement age to work in government. So if you’re a youth with good credentials, maybe you stand no chance to work in this government because the old people have privilege over you.

Right now, the damage is already done, and the president is not sure of what to expect. Bad news is a shock to him. He sits down, hoping and wishing to hear some good news even when he has done nothing.

When the problems become too much, he starts looking for a fixer; someone who can solve the problem overnight and eliminate the shame accompanying it.

The situation is only getting worse because the bad news is too much these days. That means the president’s anger and paranoia will continue to grow. Look at the deals he made with China, Blue economy initiatives, VAT tax, new school curriculum, laptop project, Huduma Namba, Big Four Agenda, the national debt, etc.

Many of these projects were not planned properly, and that’s why the outcomes are unpredictable. Buildings are collapsing, landslides, terrorist attacks, flooding, corruption, road accidents, traffic jams, homicides and suicides, hunger, poverty. A combination of all these things is making the president angrier and more paranoid.

If the country does not get any better, our president will be in a constant state of anger and paranoia such that the decisions made in his government will be based on emotions and not intelligence. In my opinion, I think this is becoming less and less of a political issue and turning into a psychological issue. Being president is not a joke.