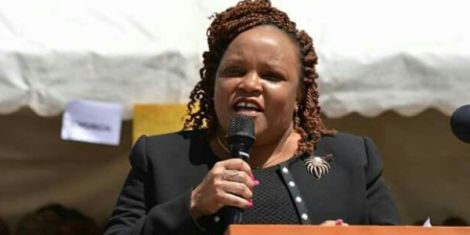 Andrew Ngirici is the husband to Kirinyaga Woman Representative, Purity Ngirici, and many people recall how he supported her 2017 bid, reportedly splashing millions on her campaign.

A source close to the politician asserted to Kenyans.co.ke that Andrew’s story is one of ‘from grass to grace’, having dropped out of Class Four.

An article by The Standard in 2018 further detailed that Andrew, after dropping out of school, turned to washing cars and operating donkey and luggage carts for a fellow villager, Mzee Arthur Munyi in Kaitheri, Kirinyaga County.

His first possession was a cart his mother, Rachel Wanjiku, blessed him with after he quit school.

Andrew also supplied crates of beer in Kirinyaga for Mzee Munyi, making a living to sustain himself.

Paul Kinuthia: From Ksh 3,000 investment to a Kenyan…

Growing up with rejection: Maureen Waititu reunites with…

Luck befell his way when he met the late spy chief, James Kanyotu, who hired his services. This was a few years before his old master, Mzee Munyi succumbed in a road accident.

Kanyotu’s and Andrew’s families were acquittances for long, with reports detailing that the latter’s grandfather offered shelter to Kanyotu’s father before. Kanyotu’s father would later purchase land in Kirinyaga where he settled after retirement.

“Using his newly found networks, Ngirici’s husband ventured into the transport business, investing in matatus and buses,” our source asserted.

Andrew borrowed a leaf from Kanyotu who had ventured into real estate, security,  property, security, hospitality and large-scale farming, besides interests in insurance, banking, manufacturing and health sectors.

“Ngirici stood alone by Kanyotu’s hospital bed when he took his last breath and you can, therefore, see the degree of trust the former top spy had in him,’’ a neighbour who sought anonymity informed The Standard.

His media house, Mt Kenya TV, is asserting itself in the industry, offering competition to well-established houses.

In September 2018, it poached presenters, producers and editors from Royal Media Services and Mediamax.