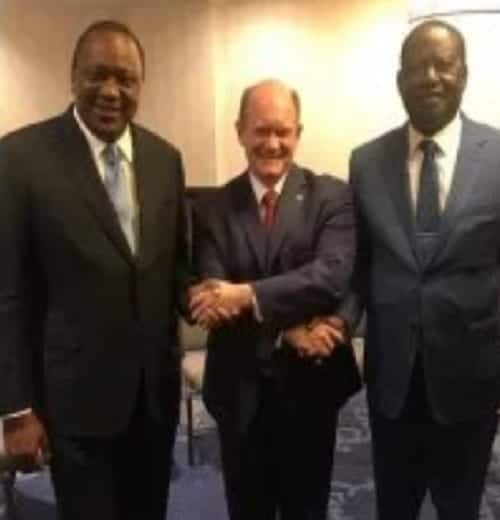 A US senator got more than he bargained for when he praised President Uhuru Kenyatta and ODM leader Raila Odinga and the Building Bridges Initiative (BBI).

Delaware Senator Chris Coons shared a picture of a three-way handshake with the two leaders who are in America on official duties.

Coons gushed over the meeting he had held with the Head of State and the opposition leader where they had opened up about how they had successfully dealt with ethnic divisions which had plagued Kenya over the years to come up with “nationwide embraced” BBI.

However, his comment seemed to have rubbed Kenyans the wrong way. Netizens across the political divide flooded his page where they sought to put the record straight with some pointing out that Uhuru and Raila had flatly lied to the Senator. The post had attracted 22,000 comments by the time this article was published.

“They lied to you, things on the ground are totally different, do your homework well before tweeting again matters concerning Kenya,” wrote Carter

“It’s a lie. The two demagogues have come together to eat. They are not doing anything substantive. The country is marred with corruption, abrogation of the court orders and human rights abuse,” opined Kalos Voice.

A section of Kenyans felt the President and ODM leader were the main cause of the problems in Kenya and even urged the US to retain them for good.

“Kenya has been very peaceful for the last few days they are in USA… adopt them,” wrote Bey.

“Those two thugs are the main source of Kenya’s problems. Let them stay there Kenya is peaceful without them,” offered Moses Ogutu.

“We donate President Uhuru Kenyatta & Raila Odinga to you guys. Do with them as you so wish. We’re at peace without them around!,” remarked G. Wainaina.

Others were of the opinion that BBI was nothing about the common mwananchi. They said it was a ploy by the two leaders to continue their dynasties by further dividing Kenyans.

“The Building Bridge Initiative is a selfish interest. It has nothing to do with the interests of the common citizen,” stated John Gakuru.

“They didn’t tell you that they are blocking Dr. Miguna from Coming back home using illegal Red alerts? They are the main problem in Kenya . We are still divided,” wrote queen.

APPEAL TO THE COMMUNITY-DEATH OF DANIEL WACHIRA KARIMI