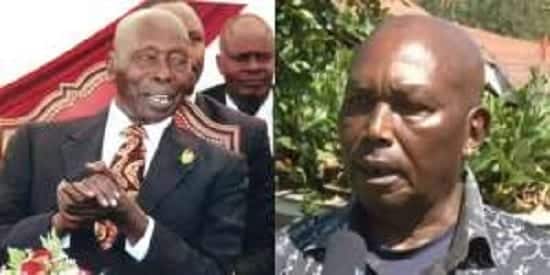 Lee Njiru who had served as retired President Daniel Moi’s press secretary for 42 years has let the cat out of the bag on his striking resemblance to the late president.

Conspiracy theorists in their droves had previously compared photos of Moi and Njiru, claiming that the press secretary was Moi’s son.

However, appearing on Citizen TV’s JKlive, Njiru rubbished the theories saying he looked more like Mzee Moi’s younger brother and not a son.

“I was born in 1949 in Embu, Mzee Moi had not been to Embu during that time. I look like a younger brother not like a son…” He explained.

Njiru also left JKLive host Jeff in stitches after saying he was willing to subject himself to a DNA test if needed.

“I was born in 1949 in Embu, Mzee Moi had not been to Embu during that time. I look like a younger brother not like a son…” – Lee Njiru #JKLive pic.twitter.com/CQ5rgZwY9w

Claims that Njiru is related to the Moi family began almost immediately after the late president passed on at the Nairobi hospital on Tuesday.

Kenyans on social media were quick to point out that Njiru who appeared on a dozen TV interviews looked like a younger Moi.

The claims were fuelled by his extensive knowledge of the clockwork that made the Moi presidency tick.

For instance, he made claims that Moi died aged between 102 and 103, contradicting Moi’s kin who had previously said the retired president died aged 95