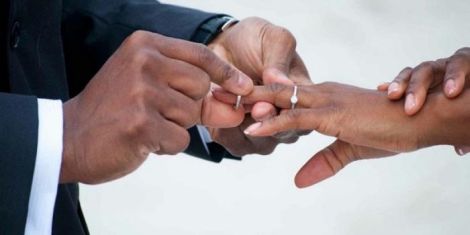 The head of production at a local media house has married the love of his life days after he interrupted a church service to propose to his partner.

According to a video posted on Facebook, the two lovebirds tied the knot in a beautiful ceremony attended by friends and colleagues.

The ceremony was led by popular presenter Ngoni Thuita alias Ole Matope as the MC of the day, bringing life event that marked the start of the couple’s new journey.

The crowd was also charmed with great music and joined in the dancing that lasted for a moment.

Mwangi is one of the longest-serving employees at the Kikuyu radio station and worked his way to the top position, making him one of the most revered employees in the company.

On January 14, Mwangi made a surprise marriage proposal to Esther during a live worship session in a church where she fellowships and is a member of the worship team.

The well-planned proposal started with a ring being brought to the pulpit using a drone, something that slowly attracted the attention of the congregation.

However, the choir led by Sarah K continued with the worship session, Esther not knowing what was in store.

Fellow presenter, Jeremiah Nyaga, clad in Maasai attire, took to the pulpit too where he picked the beautifully wrapped ring from the drone and proceeded towards the bride to be.

A confused Esther tried changing position, heading to the right side of the pulpit only for her lover to appear unexpectedly and propose, leaving her in tears of joy.

As he put the proposal ring on her finger, the crowd cheered on, surprised by the rare act of love.

Sarah K, who is popularly known for her hit songs Liseme and Nina Sababu among others, wished David and Esther a great time in their marriage.

“Serve God faithfully in his house and He will eventually reward you with all that you need. I am happy for Esther and David as they mark an important stage in their lives.

“There are still great men out there who are willing to marry great ladies,” remarked Sarah K.