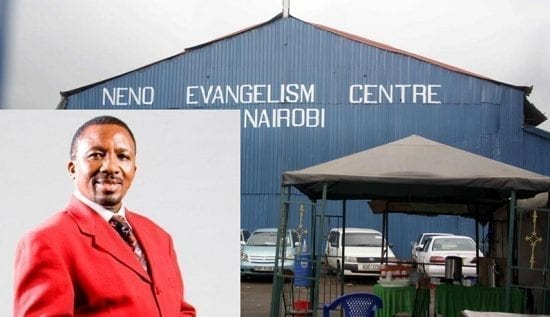 The Kenya Railways has issued a notice to reclaim the land occupied by Neno Evangelism church owned by controversial preacher James Ng’ang’a.

In a letter addressed to the preacher on Friday, Kenya Railways says the land was illegally acquired and has been marked for repossession.“The purpose of this letter is to notify you that plot LR. No. 209/9640 encroaches on the land initially reserved for railway use.

You are hereby requested to surrender all documents relating to the irregular allocation of the above referenced property to the Corporation,” reads the letter.

Kenya Railways said the reclamation and repossession is being done with the help of the Ethics and Anti-Corruption Commission (EACC) together with other asset recovery agencies in a process to reclaim all its land irregularly and illegally allocated to private entities.

“Historical records in our possession indicate that the land bound by Haile Selassie Avenue, Uhuru Highways and Bunyala Road in which various Railway infrastructure are contained was reserved for railway use,” said the letter signed by Kenya Railways MD Philip Mainga.

Pastor Ng’ang’a, who claimed to be in a solitary retreat in a forest, said he has not seen the letter by KRA. He said he bought the land in 2003 when his church started growing and he felt they needed a bigger space.

“The land was sold to me by Central Bank when a bank whose name I cannot remember went under and the bank was disposing several property, the land was part of it,” he said.He also said he is leasing the land adjacent to where his church sits.

“Those are the things that disturb my spirit. Media should not call a pastor who is deep in prayer to ask about land. I am deep in talks with God for now, please!” said Ng’ang’a.

He later admitted that he had sent his people on the ground and they informed him that on Friday, a team went near his church, surveyed it, took some measurements and left.“I am told they were in the property behind my church.

Not my church because my land is legally acquired,” he said.On Friday, Ng’ang’a posted a video of himself preaching inside a thicket, on top of a tree.It is not clear how soon the land will be repossessed, but it is yet another scandal that has rocked the pastor’s church.