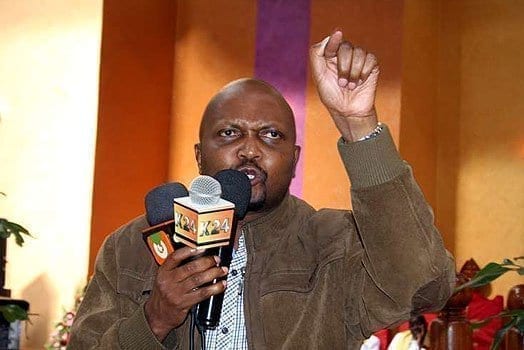 This comes just a day after the Ministry of Health announced that the first patient to have contracted COVID-19 in the country, Brenda Cherotich alongside Brian Orinda had recovered.

Kuria, in a Facebook post has urged Kenyans to heed the precautionary measures to prevent the spread of the virus adding that they should forget the duo making appearances on the media.

In addition, Kuria has alleged that President Uhuru Kenyatta was ill-advised on the matter and claimed that he had missed his Deputy, William Ruto who has since been off the limelight.

“From a communications point of view, the Government of Kenya performed badly on COVID-19 yesterday. Forget the Prophet Owuor healing Press Conference for the Brenda & Brian Initiative. Do not be fooled. Continue keeping safe. Corona Virus is a very lethal killer. 100,000 Americans will die in the next 2 weeks as confirmed by President Trump,” he wrote.

In a different account of events, Starehe Member of Parliament Charles Njagua questioned the idea of publicizing the names of COVID-19 recoveries.

The Starehe legislator alluded that publicization of the recoveries’ names would make Kenyans be more careless with the idea that it is treatable at the expense of the government. Njagua stated that move would make people take the virus less seriously hence leading to more spreading.

“I’ve received calls from my constituents telling me that they’re now even more afraid of hunger than they were of COVID-19. They can see it’s curable at the government’s expense. Was that press conference with Brenda & Brian a good idea? Did President Uhuru Kenyatta’s advisers fail him?” Njagua wrote.

According to the CS, the positive cases came about after 300 tests were done in one day on people who had been quarantined by the government.

Earlier, he had confirmed that the two COVID-19  patients had recovered and were out of isolation.