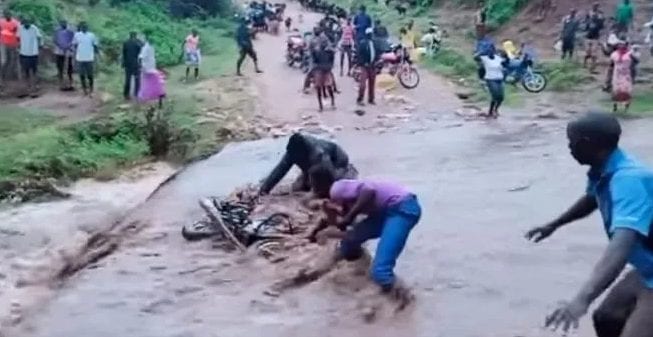 Journalists along with staff from the Kenya Red Cross were stranded along a section of the Hola-Garissa Road on Tuesday, April 28, after it was destroyed by floods.

A video published online on Tuesday showed that the journalists had attempted to cross the area in a Kenya Red Cross land cruiser, only to get trapped midway.

Residents and motorists combined efforts to help pull the vehicle out of the water.

They were forced to get off the vehicle and navigate the floods, as a police officer organised locals in efforts to get the vehicle out of the water.

“We had planned to do a flood assessment at Sala and Mororo in Tana River. Unluckily we came to this place and the road had been cut off, and transport has been paralysed,” Hassan Musa, Kenya Redcross Coast Regional Manager stated.

“There are vehicles ferrying mangoes, watermelons, even women and children crossing this region have been affected. Two of our vehicles have been trapped in the water after we attempted to cross,” he added.

He informed that the conditions in the area continued to worsen but stated that flood assessment activities in Tana River County would not be halted.

Residents and motorists have been forced to camp and spend cold nights along the road, after the floods destroyed a major section.

“We have been here for six days now due to the road being cut off. Every time it rains, we have to spend nights along this road, why can’t the government see that and step in. Business people are counting losses, vehicle owners as well,” Mushrif Mohammed, a truck driver decried.

Musa further revealed that over 500 households had been affected by floods in the region, as they advised members of the public to seek safer grounds.

He stated that the Kenya Red Cross would provide a boat to help affected residents to navigate through the area.

Joseph Kimani, a trader from Kiambu stated that he had been stranded along the road for 14 days and that the items he had been transporting had gone bad.