Former K24 News Anchor Betty Kyallo was an emotional wreck on June 21, after Denis Okari shared some powerful words with their daughter – Ivanna.

The three had reunited to mark Ivanna’s 6th pink-themed birthday, and when it was time for Okari to speak, not a single eye was left dry in the room.

“I’ll be the first man to fall on my knees for you before that other boy comes. You are the most intelligent, smartest, most beautiful and precious daughter anyone would want in this world.

“I love you so much and pray for God’s blessings upon your life,” he said after going down on one knee. 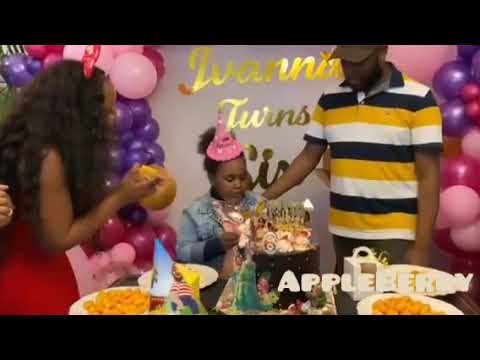 He then kissed her on the cheek, an act that was too emotional for Betty to bear as the tears that were welling up during the father-daughter intimate moment just burst out.

“Happy birthday mami, I love you so much and may God always bless you and keep you in good health,” Betty said when it was her turn to speak.

It turned out to be a Father’s Day to remember as Okari stole the show with his special message.

The joyous occasion was all captured on video and uploaded on Betty’s newly launched YouTube channel.

Despite their highly publicised fall out in 2015 just months after the two got married, Ivanna has been their North Star, guiding them back to a place of love and happiness.

During a recent interview on YouTube with comedian and Radio Milele presenter Jalang’o, Betty was full of praise for Okari, revealing that the three (including Okari’s wife Naomi Joy), had finally found common ground.

“There are things that we came to realize are very important about our lives; that it’s not just always about us as adults. We are on very good terms with him, his family and his wife, and we’re making sure that Ivanna is getting the love that she deserves; daddy and mummy’s love. It is so important to nurture that relationship between a dad and his little girl,” she said.

“Right now they’re besties. I call her and she’s like ‘I’m with Daddy,’ and I feel good. That’s exactly how it’s supposed to be. He’s doing an amazing job and we’re co-parenting,” she added.

Betty recently quit her coveted job at K24 and has since focused on using her brand to venture out on her own.

REVEALED: Names of the “Evil Forces” that forced Uhuru to sign the Mudavadi deal