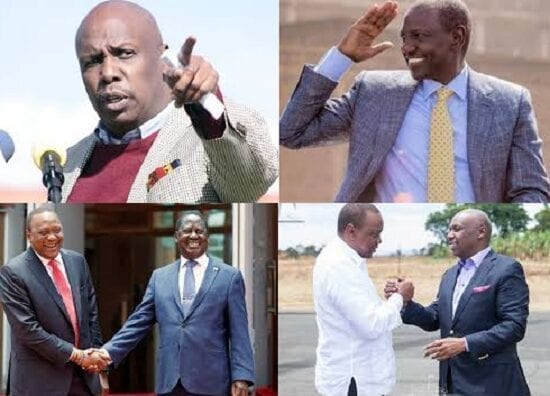 Tribalism drives Kenyans in presidential elections. Each tribe has a kingpin who it supports and these kingpins woo every member of the tribe directing them towards the polling station: like sheep following the shepherd home or to slaughter. However, in the coming general election, faith will play an important role. Will the Kenya Christian community support candidates on their Christian positions or tribalism?

According to population statistics, Christianity is the dominant religion in Kenya accounting for 85.52% of the population. Islam follows with 10.91 %. The other religious groups include Baha’i, Hinduism and African traditional religions. With this kind of population it is important to consider faith as a driving force in Kenya’s political calculations. Every president in Kenya has claimed Christianity as their faith.

Kenya’s first president, Jomo Kenyatta, claimed not only to be a Christian, but a born-again believer in Jesus Christ, (see S.L.B Leakey). His policies promoted Christianity in education, broadcasting, health, and culture (see “Reconstruction of An African Idea of God: A Philosophical Analysis with Reference from a Christian Perspective”). The referenced work considers the religious writings and philosophy of Kenya’s first president. Kenya’s second president, Daniel Moi, was also a Christian and an elder in the Africa Inland Church (AIC, the second largest denomination in Kenya after Catholicism). Mwai Kibaki is a Christian, who is a baptized Catholic. The current President, Uhuru Kenyatta, is also a mass- observing follower of the Catholic faith, with secular inclinations.

During the recent elections, the theme for the Jubilee Party, which is currently governing Kenya, was: “Si Uchawi Ni Maombi” (Not Witchcraft, but Prayers). This theme originated from the common village talk among Kenyans that Raila Odinga is a witch- doctor or calls on them, with many speculating that his son died because of such rituals. Though there is no evidence about his son, Kenyans operate on village talk, which sometimes find its way into social media. Despite this non-Christian reputation, Raila Odinga gathered over 5 million votes. It is therefore right to conclude that among his voters were many Christians, who knowing the rumor, ignored it all together. These voters were guided more by tribal affiliations than religious belief.

The coming general election will be different for several reasons. First, Kenya’s Deputy President William Ruto has made Christian virtue and faith a theme in the villages. Not only has he brought forth the need to support the church financially, but he has been attacked by Raila Odinga for contributing money to the Church. Financial contribution and support of the Church by politicians is nothing new in Kenya. The historical philosophy of Harambee (pulling together) helped build many schools and churches.

Knowing the role of the Church, Gideon Moi, has become more churchy. However, the villagers in the Kalenjin community and in Kenya as a whole argue that this current motivation is not genuine. Although Kenyans can identify the root of William Ruto’s Christianity having been a staunch member of the Christian Union Movements in
Kenya’s university system, and being a baptized member of the Africa Inland Church, Gideon’s Christian affiliation is nebulous. There is also village rumor that because he is married to a Somali Muslim, he is not a true Christian. This fact, however, means that he will enjoy the Muslim vote?

The fight to become the kingpin in Kalenjin community is necessary if either William Ruto or Gideon Moi is going to enjoy the full tribal support necessary to up their numbers. However, given that the majority of Kalenjin are members of the African Inland Church, it is hard to see how Gideon will win this battle. His father was genuinely a Christian and his affiliation with AIC was authenticable. Raila Odinga in the view of many Christians remains a ‘Mchawi’ (a witch- doctor). However, it is important to note that he still has the 5 million tribal votes, Christian or not.

At the end of all things in 2020, it seems a majority of women in Kenya are not only Christian, but are happy to shout out loud that they are genuine followers of Jesus Christ. A majority of men in Kenya unfortunately are nominal Christians who would rather go for a tusker and ‘nyama choma’ than attend church. The young people in Kenya are lost and confused by poverty. Most of the time, they support the person who will wet their beaks with 200 Kenya Shillings. The people who vote by faith are women. This fact permeates in every tribal setting. From the Kisumu women fellowship through the Luhya, via Kalenjin, through GEMA and Kamba to the Pentecostals in Mombasa, the person who wins the heart of the women wins Kenyan Christian vote. Therefore, the person who will receive Christian support is him who women believe is a genuine Christian and the village Christian has William Ruto in their heart.

Should faith play a role in political decisions? The right question is, are Christians members of the voting community? And should they care whether their country is run by the forces of darkness or by those who espouse God’s grace and mercy? To the Christian, the answer is plain and simple.

A MOMENT OF SPIRITUAL REFLECTION: WHAT MAKE PEOPLE WORRY?