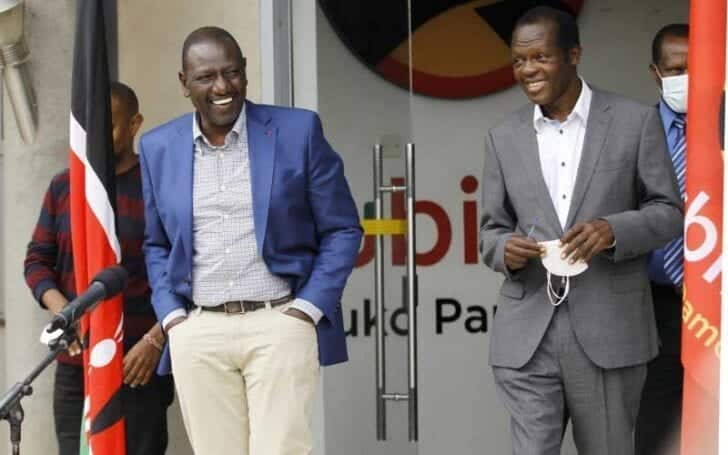 When Deputy President William Ruto drove into Jubilee Party headquarters yesterday, the plot was set that he would turn the tables on the party and hand the ticket to a candidate for Msambweni Constituency by-election.

Nobody knows what transpired between 1.46pm when he went into a private meeting with JP Secretary General Raphael Tuju and 4.18pm when he came out to announce that the party would not field a candidate.

Before Ruto arrived at the headquarters, a trip that he was taking for the second day, Tuju had announced that the party would not field a candidate in the by-election occasioned by the death of MP Suleiman Dori.

Tuju cited the cooperation between Jubilee and ODM as well as the political storm over the two-thirds gender rule.

“With the unprecedented cooperation between Jubilee and ODM in Parliament in the recent past on matters of national importance and given that it was an ODM seat, the decision has been made that Jubilee will not field a candidate in the interest of the bigger picture,” Tuju said.

Just 20 minutes later the party headquarters was cleared by security and Ruto, in a convoy of six vehicles, drove in and went straight into the meeting with Tuju.

Two and a half hours later, Ruto came out to announce that he would abide by the party decision though he did not agree with it.

“We have agreed as a party that we will not field a candidate in Msambweni. This is unfortunate for me and since the decision had been communicated earlier, we will all stand by it,” said Ruto.

The Jubilee deputy party leader had on Tuesday evening stormed the headquarters but did not have any meeting because Tuju and most of the party officials had left the office.

The DP said he was of a different view on Jubilee fielding a candidate and said he was not consulted.

In light of the decision, Ruto gave the strongest hint that he would support a candidate of his choice in the by-election.

Notably, Mariam Sharlete, who recently decamped from ODM, had arrived at Jubilee headquarters to pick her nomination papers for the December 15 by-election.

“Any candidate, including Mariam here, can seek my support and I will campaign for them, but this will be the last time the party is not fielding a candidate,” said Ruto.

Jubilee Vice Chairman David Murathe said Ruto was free to field a candidate using other political parties or as an independent.

Murathe said they will be backing the ODM candidate, who he has labelled the ‘handshake’ candidate.

“There are several parties that they can use to field a candidate if they have to. There is that The Service Party (TSP) by Mwangi Kiunjuri. They have to know that what Tuju has said is the party position. If Ruto has a problem with the decision, let him face the president because the SG has basically communicated the position of the party leader.”

Besides Sharlete, Msambweni Knut executive secretary Bashir Kilalo had expressed interest to run on a Jubilee Party ticket. Sources indicated yesterday that Feisal Bader, a relative of Dori, could run as an independent candidate.

Other by-elections that will take place alongside that of Msambweni Constituency are for Wundanyi/Mbale, Kisumu North and Kahawa Wendani wards. Jimmy Mwadimi is the ODM candidate for Wundanyi/Mbale seat, while those eyeing the ticket for Kisumu North are Thomas K’otieno, Bernard Muga, Samuel Dedeh, Caroline Owen and Ramadhan Bilali. The party has received an application from Jimmy Miyoma for the Kahawa Wendani seat.

“The board is proceeding to the next stage of vetting the applicants and has invited each of them to an interview in this regard. Any party member with a concern regarding any of the applicants should share this with NEB through email,” said Mumma.

Pulling out of Msambweni by-election is seen by Ruto allies as a ploy to tame the deputy president, given that Kwale County has Jubilee elected leaders and is therefore not ODM’s “bedroom” like was Kibra.

They claimed the reason for not fielding a candidate was to block Ruto from facing off with ODM leader Raila Odinga in the by-election.

“There was no consultation. It must be a decision by a cabal within Jubilee that has held the party hostage,” said Nandi Senator Samson Cherargei.

“We are major stakeholders in the party and nobody sought our views before making this unfortunate decision. Election is about competition, so you can never talk about BBI every time there is a by-election,” said Serem.