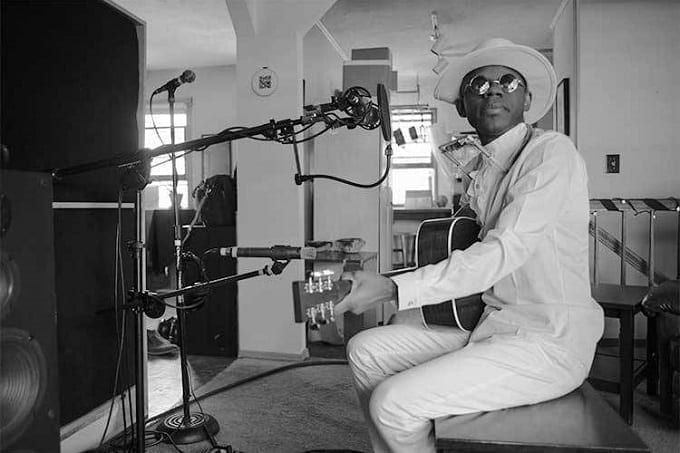 One of the more interesting cats to emerge in the acoustic guitar world in the past couple of years is Kenya-born, Minneapolis-based singer-songwriter J.S. Ondara (known simply as Ondara now), who came out of the gate strong with his wonderful 2019 debut release, Tales of America. The album was greeted by rave reviews, found its way onto Billboard’s Emerging Artists, Americana/Folk, and even Rock album charts, and earned him a Grammy nomination in the Best Americana Album category. Ondara has opened for the likes of Lindsey Buckingham, Neil Young, and the Lumineers. Not bad for a guy who didn’t even play guitar until he won a green card lottery and moved to the United States in 2013.

However, growing up in Nairobi, Ondara was constantly scribbling away in journals—poems, stories, potential song lyrics—all the while absorbing the music of American and British songwriters, from Dylan to Bowie, as he dreamed of someday being able to afford a guitar. His songs—some drawn from those early journals, but mostly more recent jottings—are personal and evocative, his voice a clear tenor that sometimes climbs to a searing falsetto (which sounds quite “African” to me). His guitar playing is a mix of sturdy strums and the occasional decorative filigree.

Tales of America drew heavily on his experience of being an immigrant, and now his second album, which unexpectedly materialized this summer, is entirely devoted to songs inspired by the coronavirus pandemic: Folk n’ Roll Vol. 1: Tales of Isolation finds Ondara, alone in his apartment, armed with just acoustic guitar and harmonica, baring his soul on a powerful collection of tunes he wrote and recorded over a period of less than a week. What was originally slated to be his second album, a fully produced affair with other players, will become the third offering from the fascinating and prolific artist.

I caught up with Ondara by phone, and began by asking about the pandemic album.

How did the songs on the new album come about?

I wrote a bunch of words first; it was a strange process. Just go-go-go—almost a stream of consciousness over three days in my journal. Then I went through it and picked out ones I thought could be made into songs and came up with some melodies, and then I grabbed the guitar and tried to put them in some progressions. It happened really fast. I didn’t want to think about it too much, so I recorded them right after that. It was almost like a vomit of words and melodies.

But in a good way!

[Laughs] Of course, yes! And of course it helped to be able to have an engineer who could just set up and record.

One of the last records I recall that managed to successfully distill ideas and capture some of the zeitgeist of an event was Bruce Springsteen’s The Rising, which came out in the wake of the 9/11 attacks. I’m curious, are you a fan of his?

Oh, yeah. I was coincidentally listening to [Springsteen’s spare acoustic album] Nebraska a lot when I was making this record. I love that record.

Ever seen the Devil? Well, he is in Mombasa