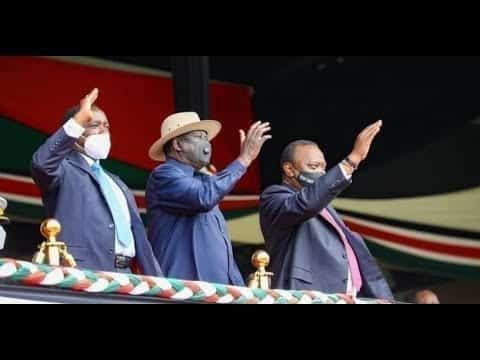 After saying that the BBI (“Beba Baba Ikuru”) initiative was not about adding positions for politicians, the report that was given to President Uhuru Kenyatta and Raila Odinga confirmed the opposite. The purpose of the BBI is not to change the Constitution with an intention of creating a methodology for serving the people; rather, it is a method of guaranteeing that Raila Odinga and his cronies have permanent positions in government. The question that every rational Kenyan must ask is this: “How is creating more positions for politicians going to improve the lives of the common man?” People are dying of disease and poverty and the only thing the president wants to do is add to the 6.2 billion Shillings that Kenyans are paying to support Members of Parliament, Senators, Governors and MCAs?”

The definition of ‘bewitch’ is to “cast a spell on someone” enslaving them to a doctrine or idea from which they are not rationally able to free themselves. Now looking at the BBI report, those Kenyans who were in doubt that President Uhuru Kenyatta has been bewitched, are listening to those who have been saying it out loud. They are now guided by what Raila Odinga said during the delivery of the BBI report. He said “Nyoka Imetoka Pangoni”, meaning, the Snake has come out of its hole!( See video below) If there has not been an association between the act of bewitching and the whole movement within BBI, then why appeal to the ‘NYOKA’, which is associated with witchcraft? The only way to defeat the ‘Snake’ is to follow the implication of what defeated the snake within biblical history.

The Bible associates the ‘Snake’ (Satan) with the genesis of evil and sin. In Genesis chapters 2 and 3, the Bible presents three movements. The first one is God, the Benevolent Creator providing all things to and for man. The second is the ‘Serpent’ (‘Snake’ or Satan) approaching man as the liberator from what the snake tells Eve is an oppressive and deceptive God while casting a spell of deception on Eve. The third movement is the unveiling of the consequences of man’s submission to the ‘Snake’ (Satan).

During the unveiling of the BBI report, the handshake argued that the reason why it was necessary to add more individuals to the payroll that already consumes over 6.2 billion Kenya Shillings a month in salary is because they were trying to liberate the country from an oppressive Constitution. This Constitution, that all Kenyans voted on to approve, was the reason for Kenya’s poverty and lack of harmony. Therefore, the solution is not to help Kenyans become more prosperous by adopting what William Ruto is suggesting (helping the poor become more industrious) but, creating more positions for powerful families like the Mudavadis, Gideon Moi, Kalonzo Musyoka, and others who the people have rejected by majority vote as necessary for the leadership of the country.

What is clear in the BBI report that was unveiled is that the ‘Snake’ (the report) has come out of the hole. So, unless is stopped, it will cause havoc. As we all know, the ‘Snake’ is Raila Odinga. Before you accuse the writer of tribalism, let me remind you what the president has said about what is going on. According to President Uhuru Kenyatta, in order for there to be peace after elections, the ‘Snake’ must be satisfied. Historically we know that after every election in Kenya, it is Raila Odinga (the ‘Snake’) that called out his mini-snakes to bite the system causing chaos!

The post-election violence of 2007-8 was a result of Raila losing. He called his mini-snakes to bite the system. William Ruto’s eyes were opened after this experience because he realized that it was the ‘Snake,’ that was benefiting from his participation in the riot. After the ‘Snake’ got what it wanted, it spilled out all the mini-snakes and they were crushed by the system.

Within this historical understanding, one can see why William Ruto cannot go back to charming the ‘Snake.’ According to many Kenyans, the ‘Snake,’ in the same way it charmed itself into the heart of Eve has now charmed its way into the heart of President Uhuru Kenyatta. And if he is not aware and remains blind to this charming, he will destroy the peace and harmony that God has bestowed on the country.

William Ruto has spent time in the hole with the ‘Snake.’ He knows what is in that dark hole and he understands that it is not coming out to bring peace. Rather, it is coming out to bite the system until its hunger for blood is satisfied. If he is going to help the country survive, if he is going to fulfill his mandate, he must put his fear aside and stop the ‘Snake’ from being allowed to bite and destroy the country.