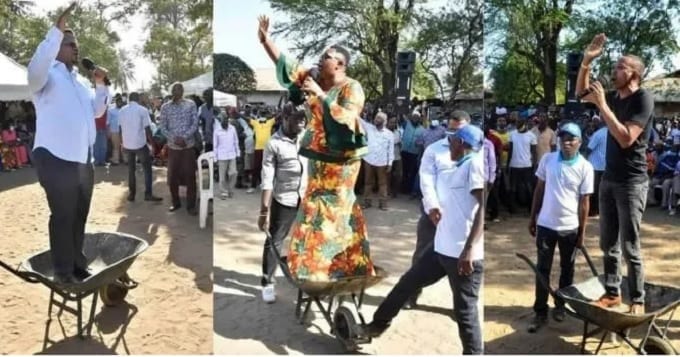 Deputy President William Ruto has taken political symbolism to a new level after his meeting in Mombasa where political leaders addressed the crowd atop a wheelbarrow during a public rally.

The MPs who accompanied Ruto on Saturday, February 6 had a hard time playing a balancing act atop the wheelbarrow in a Ruto rally at Mombasa County, many of them relying on bodyguards to boost stability.

Malindi MP Aisha Jumwa acknowledged the challenge after she appeared to trip as she decided to climbed the wheelbarrow.

A team rushed to her aid before she could fall off, with former Mombasa Senator Hassan Omar providing support to prevent the wheelbarrow from moving. Ruto could be seen watching the events with amusement. Watch Video of Mombasa Man in Tears After Storming Ruto’s Podium

Addressing the multitude from the wheelbarrow, Jumwa declared that as Mombasa residents they were done with dodgy politics. She strongly advocated for the so-called hustler movement and warmed the residents to be wary of politicians bragging without delivering.

On his part, Ruto declined to climb atop the wheelbarrow, opting to address residents from the formal dais. The DP spearheaded the empowerment of boda boda youth and women groups from 35 wards in Kilifi county, Watamu, Malindi.

In support of the DP, one of the residents endorsed the wheelbarrow initiative saying that he is hopeful that men and women would also be considered.

They also asked the deputy president to look into the land issues affecting coastal residents.

“We are determined to change the economic approach from the top-bottom to bottom-top so that we can improve the standards of living of the millions of the ordinary people at the base of the wealth pyramid, making Kenya a more equal and prosperous country,” read a post on Ruto’s twitter yesternight.

He shared in the 2030 vision of elevating Kenya to a middle-income country by assuring their support of small business enterprises which he said steer innovation.