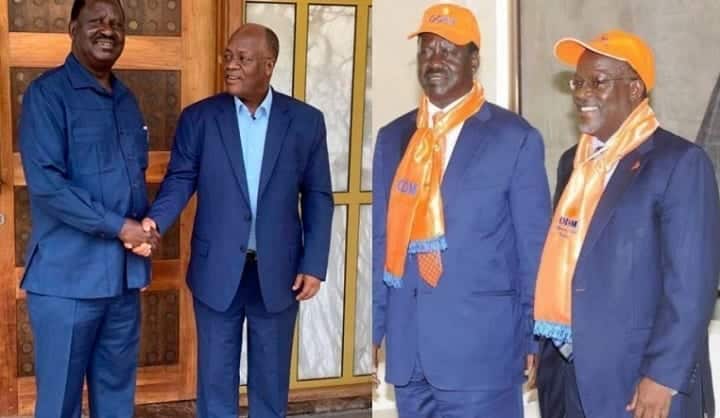 In May 2020, just as Covid-19 infections were skyrocketing the world over, former Prime Minister Raila Odinga announced that President John Pombe Magufuli was not picking his calls.

During the BBC interview, Raila also noted that the late Tanzanian President was not heeding to his advice on how to handle the pandemic that was fast spreading across the world.

The former Prime Minister, whose family has close friendly ties with that of Magufuli, wanted to engage him on the best way the country could handle the then growing pandemic.

“As nationalist, he needs to get information from fellow regional leaders… This is a regional issue. Our destiny is tied together. We do not want a situation where any of these countries will have to close their borders. That is why dialogue is the most important thing,” Raila remarked at the time.

As it turns out, the relationship between the two leaders had strained in the months leading to Raila’s swearing in ceremony in January 2018 as the people’s president.

In his book, Treason, exiled lawyer Miguna Miguna wrote that Raila had planned to hold the swearing in exercise in the Kenyan embassy in Tanzania but ideologies between the two leaders differed.

“However, when Orengo (James, Siaya Senator) told me that Raila had asked him to speak with Magufuli, who opposed our swearing in plans, that had eliminated Tanzania from being a potential venue,” noted Miguna.

Tanzania had been part of the areas the team were considering for the exercise if Uhuru Park failed. Other areas were Ghana, Kakamega and Kilifi.

Miguna disclosed that Magufuli opposed the exercise arguing that God had not wanted Raila to ascend to the top seat.

“According to Orengo, Magufuli believed that leadership was ‘a gift from God’ and that if God had not given Raila the gift, there was no reason to pursue our plans and that Raila should forget about being sworn in as The People’s President.

“In other words, Magufuli was of the view that God did not want Raila to be the President of Kenya,” added Miguna.

The former Premier was sworn in as The People’s President at Uhuru Park on January 30, 2018.

The ODM Leader reminisced Magufuli’s personal support to his family, while eulogising the Tanzanian strongman.

“He and his family have been close friends for a long time. He’s been by my side at my most difficult and painful moments,” stated the former premier.

In 2012, the Tanzanian leader attended the ODM delegates conference which endorsed Raila as its presidential candidate. Magufuli was then a minister and was received criticism in Tanzania for risking Tanzania’s diplomatic relations with Kenya.

The fallen leader was one of the top foreign dignitaries at the burial of Raila’s eldest son, Fidel.