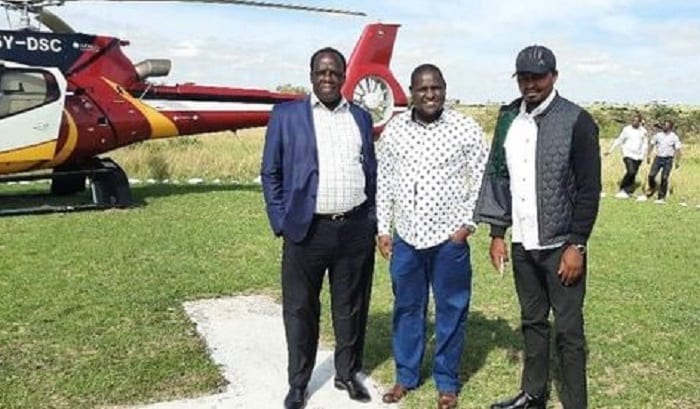 The clarification comes two days after photos of the county chief, who is also an ODM deputy party leader, in the company of Dr Ruto and former Agriculture CS Mwangi Kiunjuri were widely circulated on social media.

“Raila was initially not aware of the meeting but I called to inform him the moment I bumped into Ruto to ensure he does not hear it from third parties. He then told me to proceed and meet the DP,” Mr Oparanya said yesterday, maintaining that it was a chance meeting.

“The DP asked about how my county was doing. We talked about possible alliances, which only the party leadership can sanction. But don’t forget there are no permanent friends and enemies in politics, only interests,” the governor said.

The ODM party has lately warmed up to the idea of working with DP Ruto and its senior members say if that’s what it would take to avenge a ‘potential betrayal’, so be it. The DP’s allies too have no problem working with Mr Odinga, save for the concerns that he has the potential of scaring away the Central Kenya base, Mr Kenyatta’s backyard, which has largely warmed up to Dr Ruto.

Narrating the chain of events leading up to the meeting with the second-in-command, which has caused a political rumpus, suggesting the possibility of behind-the-scenes negotiations for a coalition between the former PM and the DP, Mr Oparanya said he thought it wise to inform the party leader because “there was a possibility of a big news coming out of there”.

Mr Oparanya said he had a scheduled business meeting in Narok County and only bumped into the DP but the fact that the second leg of the meeting extended to the next morning has more than meets the eye.

“I had no permission from Raila to discuss a possible coalition with Ruto but, of course, at the end of the day, we want to form and be in the next government,” he said, adding the DP wanted their support in the next elections.

In what insiders say is a case of the governor debriefing Mr Odinga on the deliberations with DP Ruto, the two leaders held a five-hour meeting at Mr Odinga’s home in Karen yesterday before he flew out to Kakamega.

This is the first major sign of a crack in the famous handshake between President Kenyatta and Mr Odinga, with reports that the opposition chief is looking beyond the President for a 2022 political alliance.

The Saturday Nation has established that yesterday’s meeting between Mr Odinga and the Kakamega governor and attended by Devolution CS Eugene Wamalwa was more than a normal visit. Sources said that Mr Oparanya visited his ailing boss to brief him on the outcome of the Wednesday meeting with DP Ruto, fuelling further speculation  of a possible coalition between the two bitter political rivals.

“Eugene was briefing him on mechanisms to strengthen devolution. The two (Mr Oparanya and CS Wamalwa) coming from western, it was important that they also brief Baba (Mr Odinga) on the region’s politics and best realignments going forward. So, yes, it is true that politics was discussed,” said a source close to the meeting.

At the Karen meeting, Mr Oparanya told Mr Odinga of the ‘desires of the DP’ which, among other things, we gathered, comprise the possibility of working together in a broad alliance next year.

But, like former US President Franklin Roosevelt once said, in politics, nothing happens by accident. If it happens, you can bet it was planned that way, the meeting has all the hallmarks of the ongoing realignments that could change the political landscape ahead of the next elections.

There are strong suggestions that Mr Oparanya has been detailed to ‘keep talking with the DP’ just in case Mr Odinga finds the alliance with President Kenyatta untenable. Mr Kenyatta’s handlers were caught unawares by the Narok meeting even as some expected Mr Odinga to publicly disown his deputy. This was not to be.

In a case of realpolitik, there are questions as to whether the ongoing dogfights are targeted at Mr Kenyatta whose commitment to the handshake has come into sharp focus in the ODM circles with Mr Odinga’s allies accusing him of propping up the quartet of Wiper leader Kalonzo Musyoka, ANC boss Musalia Mudavadi, Kanu chairman Gideon Moi and Ford Kenya party leader Moses Wetang’ula instead of backing him for the top seat.

While it appeared obvious they were coming from a high-powered meeting together, the governor insisted they were only pooling resources together to be able to travel to western at a time domestic flights have been banned by the President to curb the spread of Covid-19.

“You are reading too much into these things. Don’t use too much hyperbole,” Governor Nyong’o said as he left for the airside.

Mr Orengo on his part accused the media of, ‘creating narratives’ on possible realignments that could see Dr Ruto and Mr Odinga team up, once more, ahead of the next elections.

“He is a presidential candidate in ODM just like the DP is in UDA,” he said, promising to work hard to ensure the two politicians work together in a political alliance

“No one should read too much in this meeting because Mr Oparanya has the right to seek support from the DP,” he added even as he expressed optimism that ODM would work with UDA in 2022.

The ‘chance meeting’ between the two leaders saw the DP inquire about the situation in ODM and whether it is working on any alliance ahead of the 2022 general elections.

They also discussed national politics and the state of the economy, according to the governor.

“I told him that as the deputy party leader, we had not made any move on alliances,” he said.

The meeting with the DP comes in the midst of uncharacteristic silence that the governor has thrown around himself since ODM lost in its bid to claim the Matungu seat in a by election conducted last month and which has strained relationships between the Uhuru and Raila men. Mr Odinga’s spokesman, Denis Onyango declined to comment on the matter, saying, “Talk to Oparanya on the genesis and context of his mission to Ruto and his meeting with Mr Odinga.”