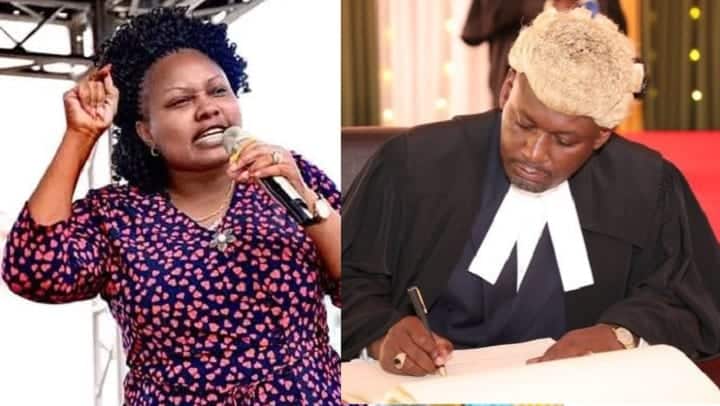 Nominated Senator Millicent Omanga has found herself facing criticism after tweeting her reaction to  Senior Counsel Otiende Amollo’s assertion that President Uhuru was not a promoter of BBI.

Senior Counsel Otiende Amollo took to Twitter to respond to Nominated Senator Millicent Omanga after she called him out for a statement he made during the Wednesday morning hearing of the BBI appeal case.

Amollo on Wednesday told the court of appeal that the Building Bridges Initiative (BBI) was a popular initiative promoted by MP Junet Mohammed and Dennis Waweru and not President Uhuru Kenyatta.

“SC Otiende Amollo submits that the president is not the promoter of BBI.

“And he says this without blinking an eye, and he expects us to believe him,” Omanga tweeted.

In a rejoinder, Amollo responded, “Not You Hon, Hi inawenyewe…”

The response attracted myriad of responses from netizens following the appeal with mixed responses.

ODM Director of Communication Phillip Etale questioned whether the nominated senator comprehended what was happening in court.

‘Do you even have the capacity to comprehend the submission before the Appeal Court… or you are waiting for a Church function to turn it into a political function,” Etale wrote in his bare-knuckled response to the Tangatanga Allied legislator.

Another Twitter user, perhaps in awe of Otiende Amollo’s oratory skills, wrote “As for me when SC @OAmollo is speaking, all I do is simply listen and concur with everything.”

“Who is ‘us’ to believe him he is submitting that before the Seven Judges of the court of Appeal unless you are one of them?” One of the respondents asked Omanga. “Mambo ya lawyers achia lawyers wewe ambia UDA wakupatie kazi Face with tears of joyFace with tears of joy,” he added with a light touch.

Another section of Kenyans sided with Omanga with one user writing ” US means Kenyans. You and Me. Do you believe Junet is the promoter of BBY?”

The High Court, on 13th May 2021, declared the Building Bridges Initiative (BBI) driven Constitution of Kenya Amendment Bill 2020 as unconstitutional.

The five-judge bench of Justices Joel Ngugi, George Odunga, Jairus Ngaah, Teresia Matheka and Chacha Mwita said an amendment can either be initiated by a Parliamentary or popular initiative, not the President.

Word of the Day:Amazing grace

Kenyans in Baltimore, Maryland React to US & UK Travel Advisory To Kenya‏