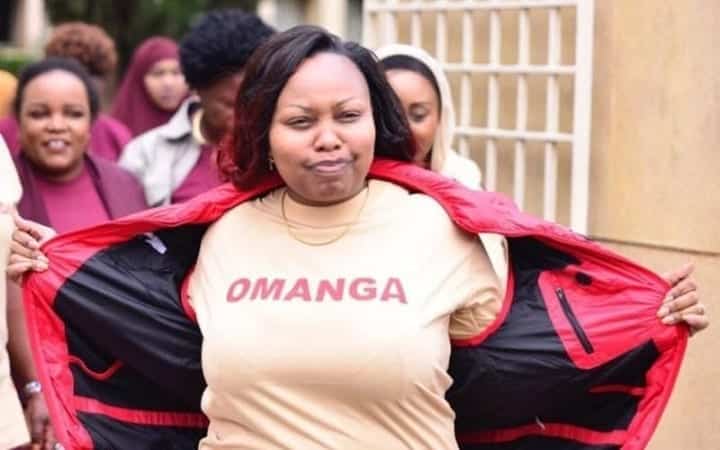 Nominated Senator Millicent Omanga on Monday revealed that she made her first million when she was just 19 years old.

Speaking during an interview on Jessy Junction, Mama Miradi as she is popularly known, said she began her entrepreneurial journey at The University of Nairobi and made her first million within a year.

“By 20 I bought a new car and I was still in the university. I would use a portion of my school fees to buy a few things in Eastleigh that I would later sell at a profit.

“By exam time I had made profits and I would use that to clear my fees,” she said.

Adding: “I was selling everything including bedsheets…I am one of the biggest bedsheet suppliers in the country.”

Photos of Millicent Omanga being ejected during the burial…

Omanga said she made her first million after supplying bedsheets to a hotel in Eldoret and from then on she started ordering items from abroad.

“I had capital (after making Sh1million) and I knew I would get a good car in Dubai…I paid the deposit and got some more items,” she said.

Speaking on her love for football, the Nominated Senator said it is something she has loved for the longest time and sets aside money to attend soccer events whenever she gets an opportunity.

“I also play football…but as a goalkeeper,” she said.

Asked if she takes offence whenever people talk about her body on social media, Omanga said it never really bothers her.

“I love myself and I love the way I am. Even when they make fun of me it is because they admire me.

“My husband has never complained…at the Senate they refer to me as ‘majority leader’,” she joked.

In December last year, hundreds of excited football fans in Kericho County seized an opportunity to pose for photos with Omanga during a local soccer tournament.

Although they had all showed up to watch two local teams battle out in the final, Omanga’s arrival stole their attention.

The young fans at the stadium ogled as she made her way to the stands and jostled for a photo session with the curvy politician after the match, something she is already used to and is proud of.

Ati what? Rwanda to allow condom distribution in high schools