No regrets over my role as president’s advisor, says Karua
By BMJ Muriithi in Atlanta
08/25/09 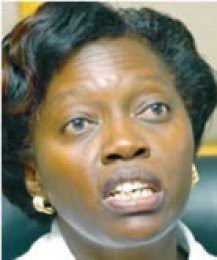 Former Justice minister Martha Karua has said that she has no regrets over her role as president Mwai Kibaki’s agent and advisor during the 2007 disputed presidential elections. Speaking to Kenyans and Americans at a well attended town hall meeting in Atlanta, Georgia recently, Karua said she saw nothing wrong with standing with the president since he was entitled to agents. “In fact, if the clock were to be rewound, I would do it all over again”, she told an attentive gathering at the Kenyan American Community Church. The Gichugu MP said she still believes that ethnic cleansing was the intention of some top leaders. “Although things changed soon after I made that statement, the initial systematic patterns of killings and wanton destruction of property can bear me out”.
And in a question and answer session which covered several topics, the former Constitutional Affairs Minister said a new constitutional dispensation per se will not solve the myriad problems facing Kenya. Ms Karua said political will and a complete change of attitude are required to restore sanity and respect for the rule of law. “If people do not respect the current constitution and break the law with impunity, what makes you think they will respect a new constitution?” She wondered. The former minister said that reforming key institutions, starting with the police force and the Judiciary, is the panacea for the ills facing the nation.
Ms Karua said president Kibaki and Prime Minister Odinga have let Kenyans down as they are deeply involved in corrupt practices. “They have close association with people named in mega scandals. It goes without saying that these two can no longer be entrusted with the leadership of that country. Kenyans have lost confidence in the political elite. That is the reason I have registered my intention to seek the position of CEO of our beloved country when the time comes”, she said amid applause.
Asked why she thinks she can succeed where other reformists have failed, Karua said that she intends to set very high standards for anyone seeking political office in Kenya. She said that as president, she would set the bar very high and seek to emulate the democratic model of the United States where the rule of law is respected and impunity is severely punished. “I will not be compromised and nothing can stop me as I know that is the only way we can change the status quo”. She appealed for support from the Kenyans in the diaspora and told those who doubt her credibility that her record speaks for itself.
Ms Karua was on a meet the people tour of the U.S. during which she held meetings with Kenyans living in New Jersey, Texas and Georgia respectively.
For comments–Click here

A Kenyan dies in Maryland