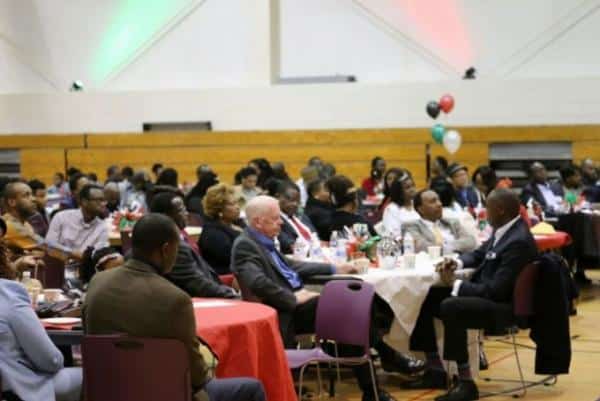 14 COWS FOR AMERICA is the true story of Maasai tribesman and Stanford University student Kimeli Naiyomah. On September 11, 2001, while visiting the United Nations headquarters in New York, he witnessed the catastrophic events that changed our nation forever.

The young man traveled back to his home, a remote village in Western Kenya, with a heavy-burdened heart to bring the story to his tribe. The village had not heard about the collapse of the twin towers in New York and when Kimeli told them about this event that had “burned a hole in his heart,” they could hardly understand its scope.

As a gift of support and compassion, the village reacted to Kimeli’s sorrow by offering the thing that most supported life for them: a herd of cows, the ultimate gift a Massai can give. To the Maasai people, the cow equals life.

With the anniversary of September 11th upon us, I wanted to remind you of The New York Times bestselling 14 COWS FOR AMERICA, a book that will undoubtedly help parents and teachers explain this horrific tragedy to the children in their lives. The Wall Street Journal said “of all the expressions of consolation sent to a grieving America after 9/11, perhaps none was as poignant as the gift of 14 cows from Maasai tribesmen in a remote corner of Kenya. How the offering came about is the subject of this moving and dramatically illustrated picture book…”


Kimeli and The Maasai inspired me to give back to the people of Kenya by donating profits from 14 Cows Jewelry to benefit AIDS orphans, and destitute women and children, in the care of DEMCO in Amagoro, Kenya.


Four years after a group of Kenyan Maasai herders touched the hearts of Americans by donating 14 head of prized cattle to the US to help ease the pain of the 11 September attacks, a new home has been found for the unusual gift.

At a special ceremony of thanks, US ambassador Michael Ranneberger was welcomed to Enoosaen village, 245km south-west of Nairobi by hundreds of cheering and ululating Maasai, clad in traditional red cloaks, scarves, head-dresses and ear-rings.

“Of all the acts of solidarity and goodwill, the one that profoundly struck the heart-strings of the American people like no other was the generosity of the Maasai elders,” he said in front of a poster of the US flag, the Twin Towers and a pair of cows.

The idea of the gift was that of a native of the village, Wilson Naiyomah, a Maasai who was a student at Stanford University in California in 2001, and happened to be in New York on 11 September.

“It was six months after 9/11 that I actually finally made it here,” he said.

“I didn’t want to do it just by donating a cow. I wanted to involve the elders that raised me, to bless it and make it sacred, to console and comfort a nation that had taken care of me and given me an education, given me a place to live. I just couldn’t ignore their pain.”

Cattle are highly valued among the Maasai community, and the gift of a cow is regarded as among the most precious one can receive from a Maasai, ranking alongside a child or grazing land.

When Maasai tribesmen marry, they give cows.

When a son wants to earn the respect of his father, he gives cows.

When there is a friend in need or a condolence call to make, more cows.

So it was in this one-cow-fits-all spirit, that the Enoosaen elders of donated 14 prized bulls and heifers to the people of the United States.

While the gift touched surprised and touched many Americans with its honest simplicity, there was some uncertainty over where the cattle – now totalling 26 – would be kept.

To the Maasai community, such cattle is sacred and cannot be slaughtered.

It is kept as a reminder to the coming generations of the humble gesture.

But for the recipients, the US government, there was a dilemma of where to take the cattle.

The failure of the US to actually collect the cows for four years had at one time raised anger among some Maasai, who regarded it as a snub.

But that feeling is all gone now, and the Maasai say they are ready to take care of what have come to be known as “the American cattle” on behalf of the US government.

“We are going to look after the cattle for the Americans, we shall keep them in this enclosure. We shall guard them like our own cattle,” said Mzee Ole Tetia Olepemba Seneyoyi, one of the elders consulted by Mr Naiyomah.

And the Maasai’s kind gesture to the US is bearing fruit.

Touched by their compassion, the US is now supporting various projects within the Maasai community as a way of saying thanks.

“I really could not be prouder or happier than to announce that we wish to make a gift to the Maasai of Enoosaen,” Mr Ranneberger said.

“That gift is a gift of 14 [local] scholarships to needy Maasai youth. And we trust that this modest donation will be built on in years to come.”

However the Maasai are adamant that theirs was just a gesture of kindness and that they did not expect anything in return.

With cow bells jangling and Maasai women thumping up and down, doing a dance they usually do in drought times to praise God, the ceremony to reciprocate the cattle ended.

The festivities in Enoosaen were an unusual way to mark the fifth anniversary of the 11 September attacks.

But then again, it was a demonstration of sympathy and kindness – the Maasai way.