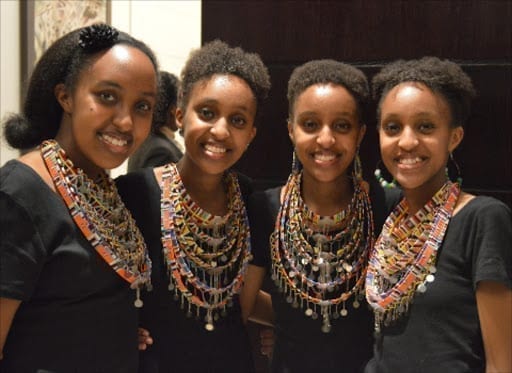 Kenya’s four singing sisters are basking in glory, having defied all the odds to win an international contest in South Africa.

The Moipei Quartet, well known for their exploits at the Kenya National Music Festival, entered the Durban festival as underdogs,

but at the end, emerged the best on the continent.

They refused to be intimidated by big bands from other Africa countries — that brought in powerful equipment, and back-up —

relying only on their voices to carry the day.

Their only external helping hand was their father, Nicholas Moipei, a member of the Governing Council at the Kenya Cultural Centre,

who conducted the quartet.

It was a David versus Goliath affair.

But an excellent performance of traditional songs, including the popular Pole Musa hit from the 1970s, and Kokoloko, had the audience

that included queen of South Africa Gospel Music, Rebecca Malope, on its feet, singing along and chanting “Kenya, Kenya, Kenya”.

Whereas back home, the girls would easily disappear into a crowd on a Nairobi street, they became instant celebrities in Durban,

the land of song and dance, being driven around in limousines.

What started as a family experiment 14 years ago has grown into a global phenomenon.

At that time, Nicholas Moipei, then a music trainer at Kianda School in Nairobi, decided to enter his four daughters into the

They won in their category, and since then, they have won many awards.

President Kibaki recently honoured them with the Head of State Commendation, an award given to people who have changed the

lives and image of Kenya.

Last week, the four did Kenya proud again when they won in the “Best of Africa” singing category in the Crown Gospel Music

The event is held yearly to honour the best of gospel music talent.

They were nominated for their song Church of the vale, off their 16-song album In the land of the lion, and were pitted against

“We never thought we could win,” said Mary Moipei, one of the sisters, who said they had butterflies in their stomachs. “After

all we are competing against the best from Africa.”

But win they did when they performed before thousands of people in the biggest gospel music awards in the continent.

They got the longest standing ovation in the category, and started thinking they had a chance. When the winning team was announced

they were in tears of joy.

“We were overjoyed to be named the Best of Africa winners,” Seraphine Moipei told the Nation. And we were so proud to represent Kenya!

The Quartet is made up triplets Mary, Malta and Magdalene, together with their younger sister Seraphine.

They are now students at Brookhouse School where they were awarded by the institution for their excellence in music.

The triplets are 18 years old while their younger sister, Seraphine, is 16.

The Quartet have travelled to many corners of the globe to perform in concerts and festivals.

They have been to China, South Africa, Korea, Canada, Venezuela, Uganda and Tanzania, among other countries.

Not many of Kenya’s older and more experienced musicians have received such exposure and fame.

According to their father, the group practices in the house and with other students at Brookhouse, encouraged by their mother

Christine, who is a music composer and singer.

It was their first time to participate in the awards.

Zanele Mbokazi, founder and producer of the Crown Gospel Music Awards and president of the World Gospel Powerhouse was all

praise for the girls and other winning teams.

The awards are very competitive, she observed, and most of the artistes have honed their skills in workshops held by the Crown

The awards given in the ceremony include Best of Africa, Best Songwriter, Best Acappella, Best Newcomer and Best Gospel Rap.

The girls recognised as Africa’s leading group are not resting on their laurels.

When they are not in class studying, or directing their fellow students in school where they are music captains, they compose.

They will be launching their album, The Land of the Lion on December 17.

On Sunday, the Quartet were presenting their music at the Braeburn Theatre.

“We thank God for giving us this talent to entertain and spread the gospel,” Magdalene said.

Going by their stamina and originality, they will be around for a long time to come.

VIDEO: Who allowed Wetangula to travel to China for anti-corruption forum?