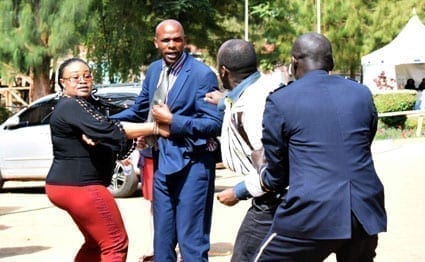 A lobby that fights for the rights of male victims of domestic violence says its officials will camp in central Kenya for three months to help deal with piling cases of domestic abuse.

Maendeleo ya Wanaume chairman Nderitu Njoka said his plate was full, trying to help battered men get legal redress to pull out of abusive marriages.

“Central Province is the worst place because women are in the habit of beating up their men. We are here to give women the ‘red card’ that such behaviour has to come to an end,” he told the Nation at the Nyeri Provincial General Hospital on Wednesday.

“Men should be respected as family heads, but in Central Kenya, they have been reduced to the role of fathering children before they are dumped,” he said.

The rising cases of single parenthood, where women are taking it upon themselves to raise children by themselves, and the piling divorce cases are testimony to the sad state of affairs, according to Mr Njoka.

Nursing his wounds at the hospital on Wednesday, Mr Kevin Muriuki, 22, swore he would end his six-year marriage over what he termed torture from his wife.

The hotel waiter from Skuta Estate is among many husbands in Central Province who claim they have been battered by their wives.

Mr Muriuki showed injuries he said were sustained, including a swollen back, seemingly the result of several whip lashes.

His head also had bumps, and he was limping after three men descended on him. His accusing fingers are pointing at his wife, a 21 year-old beautician, whom he claims hired his attackers.

“All this has been orchestrated by my wife who had accused me falsely of beating up our first-born child,” he said.

But on Thursday, when the Nation reached the woman he alleges hired goons to beat him up, Ms Magdalene Wamaitha said she had nothing to do with the attack on her husband.

She says she saw a neighbour enquiring from her daughter what had happened after she noticed the girl’s head was swollen.

The next thing she knew was that some people she could not recognise were beating up her husband, she says, adding it may have been as a result of the child’s confession that it was her father who had harmed her.

“I was hanging clothes out to dry in the back yard, and on returning, I found that there were people beating up my husband.

Rosemary Odinga arrives back in the country

To the top religious leaders!

An Open Letter to Michelle Obama: Beyonce is Not a Role Model

What is happening in Amani Ridge the Place of Peace