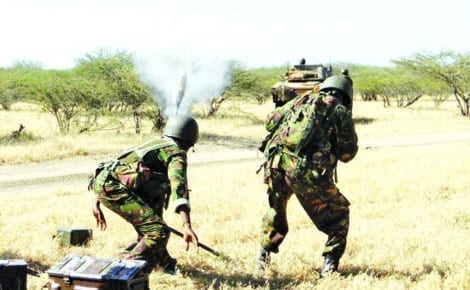 A Kenyan soldier is being investigated for allegedly shooting dead six Somalis believed to be civilians caught up in the ongoing battle between allied African troops and extremist insurgents in Somalia, an official said Monday

The soldier allegedly fired at a group of people on Sunday who approached a defensive position the Kenyan army had set up in the southern town of Jana Cabdalla, said Kenya’s military spokesman Col. Cyrus Oguna. Kenyan troops earlier this month captured Jana Cabdalla from the al-Shabab Islamist radical rebels.

“The soldier was immediately disarmed and has since been put on guarded seclusion,” Oguna said in a statement.

Kenyan troops are part of the African Union force supporting Somalia’s internationally backed government that is battling an insurgency from al-Shabab, which is affiliated to al-Qaida. Somalia has been in chaos since 1991 when warlords overthrew a longtime dictator and then turned on each other.

A team of African Union commanders, Somali troops and local leaders are working together to investigate the incident, said Oguna. He did not say when the team will present the outcome of their probe.

Since November 2011 Kenya’s military has been investigating a separate incident in which the navy shot at a boat, killing four men they believed were Somali militants but who may have been Kenyan fishermen plying their trade along the coast.

CANCELLATION OF THE MEETING BETWEEN HON. MUSALIA MUDAVADI AND KENYANS RESIDENT IN THE US

2017 poll a two-horse race between Raila and Uhuru -Ipsos