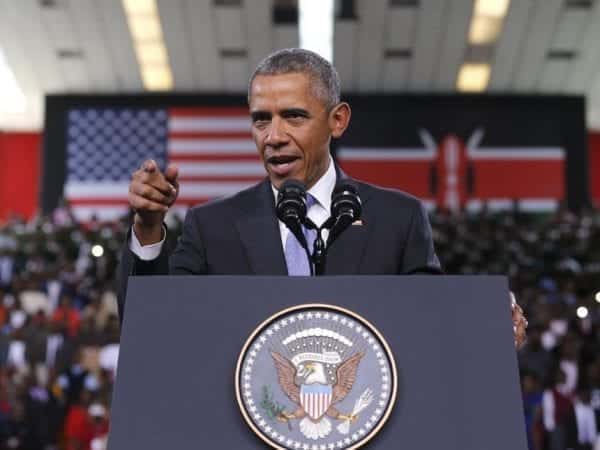 Femi Fani-Kayode, a two time Nigeria cabinet minister in the government of Olusegun Obasanjo has written a very controversial article, where he has just come short of claiming Obama is the prophesied anti-christ and is possibly controlling the weather, or is in constant communication with whoever does. He claims that Obama has a hand in last week’s Hurricane Sandy, using it to help him win the election. Several people in the know have already said that the Hurricane helped Obama’s campaign.

Below is the unedited opinion piece by Mr. Fani-Kayode.

The American Presidential elections will take place in a few days time and frankly some questions still need to be answered. I wish that Governor Mitt Romney had put one of those questions particularly to President Barack Hussein Obama during their last Presidential debate which was on foreign policy. Permit me to put that question here and it is as follows. Why did the President bow so low before Saudi Arabia’s King Abdullah four years ago during his first state visit to the Arab Gulf state and why did he feel the need to almost touch his toes with his forehead when he did so. It is a matter of historical record that no American President in the last 200 years has ever bowed so low before any foreign leader, Prime Minister, Head of State, President or monarch. It appears to me to be rather strange that Obama, on his first trip to the Middle East as President of the most powerful country on the planet, should literally prostrate before an Arab King whose country has an abominable record on human rights, civil liberties, the rights of women and religious minorities and where the system of government is a totalitarian and absolute monarchy. Luckily a picture was taken of that celebrated event and that picture really does tell us something about the American President’s mindset. Yet it does not stop there.

On that same trip four years ago, after leaving Saudi Arabia, Obama toured the greater part of the Middle East and Egypt and in speech after speech he apologised to the Arabs for American policy in the Middle East over the previous 50 years. He did this despite the fact that in most of those countries christians, shia muslims and ethnic minorities have no rights at all and even though they have been killed, persecuted and supressed for many decades. Again he did this even though none of those countries were democracies and even though all of them, except for two, have refused to acknowledge the right of the Jewish State of Israel to even exist. This left a bad taste in the mouth of many at the time and the question that came to my mind was whether the ”Hussein” was coming out of the ”Barak Hussein Obama” more than the ”Barak” itself was. Yet whatever anyone may feel about the issue of his touching his toes with his head and his bowing before the Saudi king, as far as I am concerned, President Obama is not what he appears to be. There is far more to him than meets the eye. A couple more questions will suffice to illustrate this point.

Why is it that each time Barak Obama is about to submit himself for a Presidential election and seek a mandate from his people there is a raging, monuemental, earth-shattering and record-breaking freak of a storm which kills numerous people in America? It happened a few days before his Presidential election in 2008 and it is has just happened again a few days before his Presidential election in 2012. Again why is it that on the first day of the convention of the opposition Republican party, both in 2008 and again this year, yet another violent and dangerous killer storm hit the towns in which the two conventions were held causing them both to be partially disrupted? What is Obama’s relationship with the elemental forces? What is his relationship with God or some lesser deity? What is his source of power and what is his spiritual foundation? There is no doubt that he is a powerful orator and that he delivers brilliant speeches that mesmerises his audience. Yet so did Adolf Hitler and we all know what he was. I ask these questions because President Obama has supported every anti-christian and anti-faith policy that the American permissive state has thrown up and endorsed in recent years. The violation and literal denunciation of these religious core values, in my view, betrays the unfolding of an illicit,dark, sinister and subterranean anti-Christ agenda which must be rejected by all true men and women of faith. They must be renounced by every christian, every jew and every muslim and indeed all those that truly espouse the noble values and virtues of any of the three Abrahamic faiths. They must be rejected by all those that believe in the supremacy and efficacy of a monotheic God whose core values and holistic principles and standards are worthy of emulation and of being respected and cherished. There are many examples of these gross violations of our core religious values but permit me to share just four of them with you here. Firstly, President Obama has endorsed a woman’s right to have an abortion and he has publically denounced ”the right to life” of unborn babies. Secondly, he has endorsed same-sex marriages. Thirdly, he has consistently supported homosexuality and the rights of homosexuals and lesbians. And fourthly, and perhaps the most disturbing of all, he has endorsed the right of same-sex couples to adopt and raise children. Quite apart from these four Obama has also endorsed all manner of social perversions and deviant behaviour in the name of humanism, ”new age” liberalism and the permissive American state. No true believer or person of faith can possibly accept such practices, endorse such values and still stand right before God.

Nyanza’s moment in the sun as Magufuli and Obama come…

To put the cake on the icing let me make one more point. Rev. Jene Robinson, a vocal and practising homosexual, whose ordination as a Bishop split the Anglican Church in America into two, was specially selected by Obama to deliver the invocation of the name of God and prayers at the beginning of the inaugral weekend of his inauguration ceremony as President in 2008. What message was Obama trying to send to America and to the world by insisting on this?

Outside of the area of social and religious values President Obama has also failed in the area of foreign and domestic policy. A few examples will suffice. The unprecedented number of drone attacks in Pakistan and Afghanistan which has led to record highs in the number of deaths of innocent muslim civilians, women and children in both countries. The alienation of Pakistan and Afghanistan as key allies in the war against terror. The destabilization of north Africa and the opening of the door for Islamist insurgents in the north African Arab Sahel states and the west African sub-region. The display of weakness and procrastination before Iran and its covert agenda to build a nuclear bomb. The display of double standards in the State of Bahrain and the over-pampering of the Arab Gulf states. The sheer mess that has been created in Syria and the indecision and procrastination of the Obama administration who have abandoned the opposition forces in that country even as thousands of innocent people are being slaughtered by Assad’s brutal regime.The insincerity of purpose and sheer coldness being displayed towards Israel and the indifference to her dangerous and existential plight. The disdain and contempt shown to all people of faith, the evangelical movement, the christian far-right and the vision of the old Pilgrim Fathers that founded the great country that is known as the United States of America.

The removal of the words “God” and “Israel” from the Democratic Party Convention. The disastrous handling of the American economy that has acquired a five trillion dollar deficit in the last four years. The rise of Islamic fundamentalism in Mali and Nigeria due to a shortsighted and reckless policy in Libya. The taking of power by the fundamentalist Muslim Brotherhood in Egypt and the rise in power of Al Shabbab in Somalia and East Africa. The inexplicable refusal to declare Boko Haram (the Islamist terror group that is bombing and killing thousands in northern Nigeria) as a terrorist organisation.The gradual turning of America into a quasi- welfarist state where ”big government” reigns and in which the traditional engine room of growth that is known as the American middle class is being systematically weakened and destroyed. The desecration of the traditional family unit and good old fashioned christian values by the adoption of strange and liberal “new age” practices, values and philosophies. The inability to protect the lives of American diplomats living abroad and the lack of firm reprisals after the killing of the American Ambassador and other Americans by terrorists in Libya. The massive foreign debt that America has acquired in the last four years. The huge quantum of cash that America is is now owing China and so on and so forth.

These are just some of Obama’s disastarous legacies and sadly the mistakes he has made in his foreign policy in north Africa particularly impacts on us directly in Nigeria and in Weet Africa. Let me give you just one example of that. Had it not been for the fall-out of the mess in Libya and the brutal way in which Muammar Ghadaffi, the Libyan leader, was murdered in cold blood one year ago, his Taureg friends and allies in north Africa would not have been inspired and driven to take over northern Mali and create a Taliban-style islamic fundamentalist state there and northern Nigeria would not have been flooded with jihadist footsoldiers and all manner of sophisticated arms and bombing devices for usage by Boko Haram.

With Obama all we see and hear are beautiful and inspirational speeches, a good deal of doublespeak, a failed economic policy and a weak, dangerous and thoroughly uninspiring foreign policy. Worst still all we see in Obama’s African policy is unpredictability, chaos, the appeasement of terrorists and utter confusion. Given this I cannot come to any other conclusion than the fact that President Barrack Hussein Obama cannot be trusted with America or indeed the world for the next four years. In my view he is a very mysterious, strange and complex man and sadly he has proved to be a thoroughly disappointing President. Consequently my prayer is that Governor Mitt Romney defeats him in the Presidential election which will hold Tuesday 6th November. If he does not I fear that the much predicted “beginning of the end” of America as a world economic power may have just begun. With China on the rise, Russia waxing strong, Brazil, India and Japan flexing their muscles and the European Union finally beginning to take shape and find her feet, in the next twenty years the world will be a very different place and America may no longer be “prima inter pares” (the first amongst equals). Only Romney can stop that downward trend. I am aware of the fact that, given Obama’s ancestry, this may not be a popular position to take amongst those of us that are people of colour and that are Africans but nevertheless it is still my position. I may be wrong but at least I have provided some food for thought. God bless America.