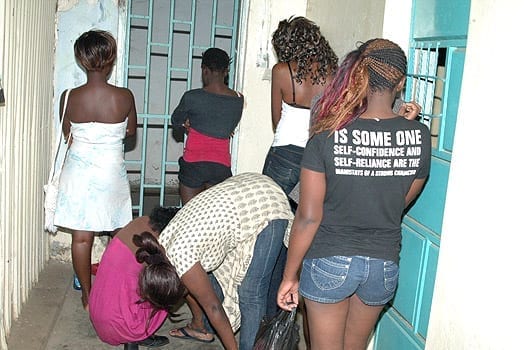 NAIROBI, Kenya, Dec 17 – Sex workers in Nairobi on Monday morning staged a protest in the Central Business District (CBD) to complain about violence and injustices against them.

They converged at the Freedom Corner in Uhuru Park from where they marched to City Hall to air their grievances.

Kenya Sex workers Alliance National coordinator John Mathenge pointed out that many of them have been killed and treated inhumanly by their clients and law enforcement agencies.

He explained that discrimination against them should stop as everybody has a right to live their lives “the way they want.”

“Nobody is a judge. We only have one judge who is God. Whatever I do with my body is my problem… my body is my business,” he stated.

The assisting project coordinator Daughtie Ogutu indicated that the society has turned its back on sex workers and no one speaks about them or even dares to intervene when a sex worker is abused or killed.

“The Kenya situation is very alarming. Two weeks ago, four sex workers were murdered in Thika, cases were lodged by the alliance but nothing was done about it. If this was a prominent Kenyan or any other citizen, there would be policemen trying to find out what happened,” she said. “However, because this is a sex worker, nobody cares and nobody gives a damn.”

Two months ago, Nairobi Mayor George Aladwa warned commercial sex workers that they risked being arrested if they did not stop conducting their business in the CBD.

Aladwa said that stern action would be taken against any commercial sex worker found conducting business within town.

The mayor urged the sex workers to use their talent in seeking income and desist from behaviour that will land them in trouble.

Early this year, a taskforce report revealed that about 7,000 prostitutes operate in Nairobi every night with each having an average of three to four clients.

The taskforce to investigate commercial sex work in Nairobi further recommended that police and council officers be accompanied by female officers when arresting prostitutes.

The report said harassment of sex workers by council askaris and police officers was rampant.

The report also noted that most suspects secure their freedom by paying bribes or even sexual favours.

Also, some of the registered and licensed massage parlours are sex dens and brothels.

The taskforce made up of 26 persons from the civil society, public and private sector was formed to establish and recommend remedial measures on prostitution.