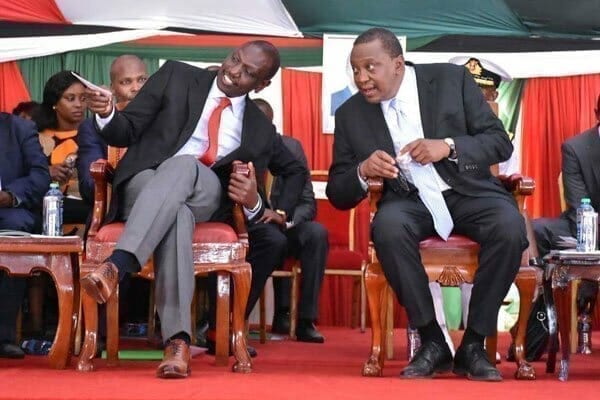 President-elect Uhuru Kenyatta returned to Eldoret for the first time after being declared the winner and thanked Kenyans for maintaining peace during the General Election.

Mr Kenyatta said Kenyans, particularly residents of Eldoret, who had been associated with violence, proved the world wrong when they upheld peace during and after the polls.

The President-elect said: “You surprised the whole world by the way you turned out in large numbers and voted overwhelmingly for your favourite candidates in peace. You voted in a way that has never been witnessed.”

Mr Kenyatta, who was accompanied by Deputy President-elect William Ruto, said upholding unity would help the country move ahead as they roll their sleeves to implement their promises to Kenyans.

“We are ready to work for you as we promised. The unity will be the foundation to ensure we alleviate poverty, create jobs, better our roads and improve the lives of Kenyans,” said Mr Kenyatta.

The President-elect appealed for calm as the country waits for the verdict of the Supreme Court on a petition filed by Cord flag bearer Raila Odinga contesting the declaration of Mr Kenyatta as the winner of the March 4 election.

Mr Kenyatta said they would strive to address the challenges facing the youth, women, farmers and the elderly in a bid to improve their lives.

“We will talk more after the ruling date,” Mr Kenyatta said when he addressed Christians and the public who had flocked to the Sacred Heart Cathedral in Eldoret.

Happiness was evident on his face as he made his speech that dwelt so much on thanking the area residents for the overwhelming support they accorded the jubilee coalition, which saw him come ahead of Mr Odinga with more than 700,000 votes.

Business came to a standstill later in the day along Uganda road, after the church service, as Mr Kenyatta’s motorcade slowly moved through Eldoret town as he waved and acknowledged cheers from the gathering that had lined up along the road.

The president elect appealed to farmers in the area not to shy away from planting crops saying that the country risked being confronted by an acute food shortage if acreage under crops is reduced this season.

“Uasin Gishu is the country’s grain basket and we have made sure seeds and fertilizer is available at low prices. Accept to go to the farms to ensure the country has enough food for its population,” said Mr Kenyatta.

Mr Uhuru’s call to farmers comes barely a week after President Kibaki responded to farmers’ outcry that the maize seeds were expensive and subsidized fertilisers were in short supply, a move that they said would compromise food production.

As a result, Sh2.7 billion was released by treasury for acquisition of subsidised fertilisers to help farmers as the planting season gets underway in various parts of the country.

The Deputy President-elect Mr William Ruto said he was proud to be part of the history in the making of ensuring peaceful coexistence amongst Kenyans.

“We will make it our business and responsibility to unite people of Kenya beyond tribe, colour, religion and creed as we strive to alleviate hunger, disease and poverty in this country,” said Mr Ruto.

He expressed confidence that under the leadership of Mr Kenyatta, Kenyans’ lives would improve for the better.

Bishop Cornelius Korir recounted how the church became a home to those who had been affected by the 2007/08 post-election violence and said he was delighted Kenyans stood for peace during the last general election.

The bishop said one cannot have all the support by his side and said Kenyans have a duty to support those who had won the support of more than a half of the electorates to enable the country move on.

“Eldoret had been known as a hotspot. It is now an Amani zone and we are happy that peace prevailed and Kenyans should maintain this peace,” said Bishop Korir.