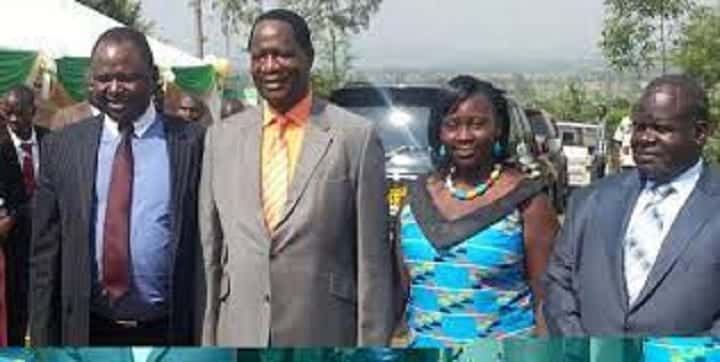 It was a day of joy for former Cabinet minister Dalmas Otieno as he took a third wife at a colourful ceremony in Homa Bay County.

Mr Otieno married Ms Dorothy Atieno Okello in a ceremony at the bride’s home witnessed by a host of senior politicians in the region.

The event came at a time when a new Marriage Bill has triggered intense debate in the country.

The proposed law allows polygamy under section 16(e) but demands that a man who is already married may enter into another marriage as long as he gives the name of his previous wife or wives and obtains their consent.

The ceremony in Homa Bay began with the arrival of Senator Kajwang who took the role of the bride’s father. He was followed 20 minutes later by Mr Otieno, who was accompanied by a large delegation of people in a convoy of over 20 vehicles.

One of those in Mr Otieno’s convoy was Governor Awiti.

The climax of the ceremony was a meeting between elders from Gem and those from Kangeso who had accompanied Mr Otieno.

During the elaborate negotiations, the visitors were asked to state their mission to the home which they did.

The spokesperson for the visitors, a former Senior Chief Mr Ariyo Anyango who is a brother to Mr Otieno, said they had satisfied the traditional requirements after payment of 46 head of cattle and a bride price of Sh40,000.

After the elders from Gem were satisfied that Mr Otieno had met all the conditions, the next task was for the groom to identify Miss Okello from among several ladies.

She was later handed over to Mr Otieno by the parents amidst pomp and colour. After the ceremony, the couple left for Mr Otieno’s Kangeso home in Rongo.

The event highlighted some of the issues which will be covered by the Marriage Bill if it becomes law.

Respecting African traditions and some religions which allow polygamy, the Bill does not bar the practice but seeks to empower women by requiring the consent of the senior wives.

However, some critics are not happy with this provision. Writing in the Daily Nation on Friday, lawyer Beverline Ongaro argued that the law was oppressive.

“On the face of it, this demand seems like a reasonable move aimed at curbing secret marriages, but it raises a number of concerns. The supposition here is that the consent will be given willingly by the present wives, and that such consent will be well-informed. But it is possible for consent to be obtained through coercion. By giving only men the option to enter into several marriages and not women, the Bill is gender-biased.”-nation.co.ke