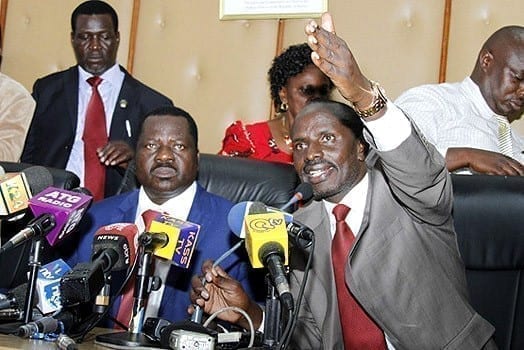 As schools re-open today, the government has moved to weaken the Kenya National Union of Teachers by denying it revenue, the Star has learnt.

Sources at the highest level of government revealed that the Teachers Service Commission will no longer be deducting the two per cent union dues from teachers salaries.

The move is aimed at ensuring that KNUT, which paralysed learning in all public schools for three weeks, does not get the money which amounts to over Sh90 million a year.

“The Teachers Service Commission will no longer deduct the money from the KNUT members. Teachers will be getting their full salary and they and the union can organise how the contributions will be made,” a source within the Presidency said.

Teachers will also suffer another blow this week as the government only intends to pay them salaries worth only one week in July, which starts today.

According to government sources, the teachers will get their June salary in full but they will not be paid for the three weeks they were on strike in the month of July.

Knut Acting Secretary General Mudzo Nzili said this new development has not been communicated to them, “We have not heard what you are telling us.”

Nzili said he does not think it is proper to comment on a matter they have not heard. But prodded further, Nzili said he was happy that the June salary will be paid.

“For the July salary, we shall engage in constructive dialogue with TSC as teachers’ employer,” Nzili said.

He went on to cite the return to work formula signed between government and Knut which assured the union that there will be no victimization.

“We don’t expect to hear or see what they are about to do because we signed the return to work formula in good faith,” Nzili said.

On the 2 percent deduction, Nzili said the illegal move is aimed at crippling the giant KNUT as a union. He said that the TSC is an independent constitutional commission that should not take orders from other quarters.

“Union dues like Sacco contributions are effected by employer as advised. We will resist any attempt to cripple KNUT,” Nzili said adding that it will be wrong for TSC to abandon this duty.

He questioned whether the move on deductions will apply to both KUPPET and KNUT and argued that the move to close down schools indefinitely was part of a larger scheme to enable KUPPET survive.

Knut claims that already 20,000 KUPPET members have defected to KNUT citing the poor strategy employed by their union during the strike.

It has also emerged that the government, through the office of the Attorney-General, TSC, Ministry of Labour and the Salaries and Remuneration Commission, is forming a standing committee of salaries in the public sector.

“The plan is that remuneration of all public servants including the teachers should be the same and should be reviewed every four years depending on the country’s economy. The standing committee will ensure that all collectiva barganing agreements have no legal loopholes,” one of the source said.

The revelation came as Deputy President William Ruto insisted that the government must come up with a way of managing the country’s wage bill and hinted of job freeze in the public sector.

Ruto said that currently, the public sector wage bill is Sh458.7 billion, projected to reach Sh548.8 billion if suggested recommendations as well as other sub-sectoral demands are incorporated.

He added that if the government is to yield to all demands the proposed wage bill would push recurrent expenditure to 79 per cent which leaves only 21 per cent for development.