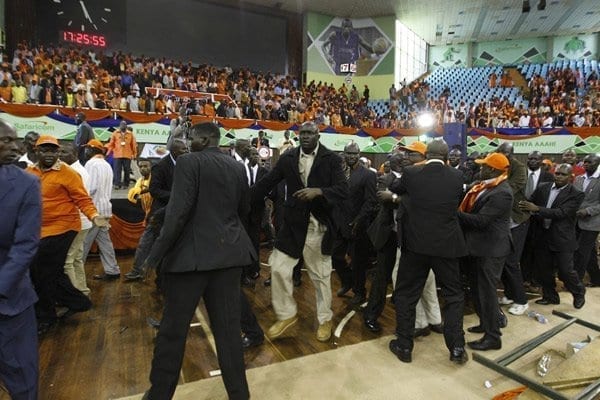 CORD leader Raila Odinga has told a Boston radio station that he knows the ‘Men in Black’.

The ten men dressed in black suits smashed ballot boxes and scattered voting papers during the February 28 party elections at the Kasarani stadium.

As a result, the elections had to be suspended. There had been widespread speculation that a faction led by Budalangi MP Ababu Namwamba defeated the faction led by Nominated Senator Agnes Zani in the race for party posts.

Raila confirmed that the men who disrupted the elections were hired by ODM to provide security and had been used before.

Raila was being interviewed by Jambo Boston Radio, an online radio station based in Lowell, Massachusetts. Raila is on a one month study tour at Boston University.

However the former Prime Minister said that the disruption must have been instigated by “outsiders” to tarnish the party.

“There is a possibility that some of the people who disrupted the elections were infiltrators from ‘outside’. One of the reasons we established a task force to look into that issue was the need for us to get to the bottom of it all. We are confident that the committee will provide answers to these questions and the party will emerge even stronger,” Raila said.

During the interview, Raila dismissed reports that former Narok MP William Ole Ntimama was planning to move ODM members from the Maasai community to TNA.

Raila also said that the Jubilee government had performed reasonably well in its first year in office.

“Having been in government, I know it is not easy. I will give them a five because at least they have acknowledged that the country is going through hard times. To acknowledge the existence of a problem is the first but very important step towards solving it,” Raila said.

He added that Uhuru’s government had failed to deal with increasing insecurity and corruption.

Before Raila went to the USA, he put together an interim team to manage the party including representatives of the Ababu and Zani factions.

A probe team set up to investigate the aborted elections is yet to conclude its investigations.

ODM now plans to replace some key officials in the secretariat who were blamed for the abortive national elections at Kasarani stadium on February 28.

The party is planning fresh polls from the grassroots upwards within three months.

The party elections board will be reconstituted with representation from both the two factions that contested the disrupted Kasarani elections.

“We believe this will rejuvenate the party and get rid of deadwood,” Homa Bay senator Otieno Kajwang said on Monday.

How Kenyans in the diaspora will register to vote